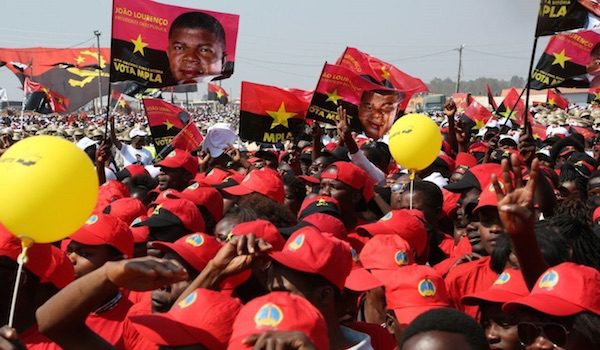 A poll commissioned by the office of the Presidency suggests that while the ruling MPLA may still win this month’s general election, their approval rating has plummeted.

An astonishing 91% of over 9,000 respondents say that the current MPLA leadership acts in its own interest, and not in the best interest of the state or the people at large.

The poll, conducted by a Brazilian company, Sensus Pesquisa e Consultoria ,across 18 provinces, predicts a mere 38% of the vote will go to the MPLA, with 32% for UNITA and 26% for CASA-CE.

While it’s a given that polls can be fallible and, at best, are only a barometer of the prevailing political weather, the figures reported by Sensus are telling, because the company had the full support of the Presidency to conduct its work.
Mr José Eduardo dos Santos is both President of the Republic and of the ruling party MPLA, since 1979. While he is retiring from the presidency, by anointing General João Lourenço as his party’s candidate, Mr Dos Santos will remain as head of MPLA.

The Angolan Constitution allows for a minority government, so the party with the most votes on the day would not necessarily have to look for a partner to be able to govern. Furthermore, the number one name on the leading party’s list is not just automatically the President of the Republic but also the head of the government.

So if these poll numbers are borne out on election day, João Lourenço would become President with just 38% of the vote even though his MPLA party would not have a majority in the National Assembly, the Angolan parliament.
That begs the question of how he would get any legislation at all, not least the annual State Budget, approved.

However, the primary message conveyed through this poll is a damning indictment of President José Eduardo dos Santos’s 38-year rule. Sensus reports: “the economic crisis has widened the divide between rich and poor… Corruption and nepotism are the main worrying factors.”

“The continuing decline in public health, the rising crime wave, and the economic crisis (which has led to rising unemployment and inflation) also contributed to the growth of public dissatisfaction.”

The electorate also have no faith in the government to do the right thing. “The larger part of the populace feel completely dissociated from the leadership and the vast majority believe the country is not on the right path.”

Taken as a whole, the survey adds up to a grim picture for the party that has ruled Angola since independence from Portugal. The Angolan people have had 15 years of peace in which to assess how well the MPLA performs in government. And their evaluation of that performance is damning.

Even if it has done nothing to rig the election, if these numbers are credible then the MPLA might get one more chance to rule Angola. But the writing is on the wall for the party of Agostinho Neto.