Police and Military Crackdown After Womens Protest in Lunda-Norte

For the first time since the end of war, in 2002, the Angolan government has soldiers patrolling the streets of a town and conducting house searches and arrests. Since June 15, soldiers of the Angolan Armed Forces (FAA) have been deployed in the diamond-rich town of Cafunfo, in Northeastern Angola, in the aftermath of a largely women’s protest, which took place on the same day. More than 15,000 citizens took to the streets in protest against the wave of brutal murders of female peasants, and the mutilation of their bodies in Cafunfo, Cuango municipality, in Lunda-Norte province. Yesterday, the soldiers and police kept the town in a state of alert with gunfire that went on for several minutes, close to 11 PM. “FAA soldiers are breaking into houses looking for young people to arrest,” Paula Muacassenha, one of the organisers of the protest, told Maka Angola. On Sunday “at 9 […]

END_OF_DOCUMENT_TOKEN_TO_BE_REPLACED 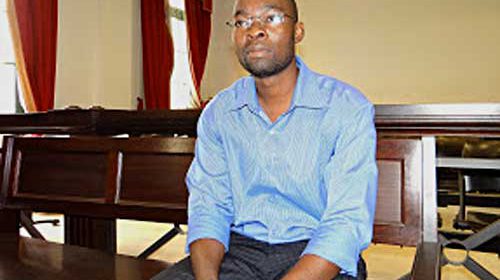 The  Luanda Provincial Court  adjourned today, June 14, the trial of journalist Domingos da Cruz, accused of inciting civil disobedience, for an article he wrote in 2009. Judge Salomão Filipe called upon the defense lawyer, Walter Tondela, and informed him of several irregularities in the case, which prevented him from proceeding with the trial today. According to the judge, the public prosecution pressed criminal charges against Domingos da Cruz based upon a revoked law on Crimes against State Security. It also failed to notify the defendant on the charges against him, and summoned the defendant by telephone. On August 8, 2009, the journalist published an article entitled “When War is Necessary and Urgent”, in the independent weekly newspaper Folha 8. In response, the deputy prosecutor of the National Bureau of Criminal Investigation (DNIC) brought charges against the journalist, accusing him of disruption of the public order and of incitement to […]

END_OF_DOCUMENT_TOKEN_TO_BE_REPLACED

Over a dozen democracy, human rights and anti-corruption groups have written to Angola’s Attorney General urging for an end to “politically-motivated” charges of defamation and libel against journalist and activist Rafael Marques de Morais. Mr. Marques de Morais has been summoned to answer charges of defamation following the publication of his book, “Blood Diamonds: Corruption and Torture in Angola”, which catalogues allegations of human rights abuse in Angola’s diamond areas. The complainants are civilian business partners of Angolan generals, the alleged perpetrators of the crimes outlined in the book. In a letter presented on Thursday, June 6, to Attorney General João Maria de Sousa, the group said: “We believe that the alleged charges of defamation and libel against Mr. Marques de Morais are politically motivated. The petitioners point out that the investigation process against Mr. Marques de Morais has been fraught with multiple irregularities, including the potential threat to the […]

END_OF_DOCUMENT_TOKEN_TO_BE_REPLACED

Victória Jamba Sequesseque is upset but she is very proud of her 22-year-old son, Emiliano Catumbela. He has been in police custody since the May 27 for having taken part in an attempted vigil in Independence Square, which was violently squashed by the National Police. The vigil, organised by the Revolutionary Youth Movement, sought to peacefully mark the first anniversary of the disappearance of the activists Alves Kamulingue and Isaías Cassule, who were kidnapped in Luanda. The young man, currently being held in the district of Viana, gave details of his torture to his mother and Member of Parliament Leonel Gomes, during a visit on Saturday. “It was the provincial commander of the National Police [in Luanda], Commissioner Elizabeth “Bety” Rank Frank, who personally gave orders to the police officers on duty to beat the young detainees, and to make sure to hit them in the head, Emiliano told us,” […]