This is an edited version of the presentation made at the Conference: A Celebration of Mandela’s Legacy and a Reflection on Democracy and Good Governance in Africa.

I am honored to return to the European Parliament as a guest of the Socialists and Democrats Group, for Africa Week. This meeting is special – it coincides with the centenary of the birth of one of Africa’s most celebrated leaders, Nelson Mandela. So it is a fitting day on which we take the opportunity to pay homage to his wise legacy and share our views on democracy and good governance.

In Africa, what counts as democracy and good governance?

The definition of these two concepts has spawned many political arguments – not to mention an entire industry of scholarship. In homage to Mandela, and with regard to the relationship between rulers and the ruled on the African continent, allow me to quote an Angolan proverb: “when the drums are fine-tuned, then wolves and goats can dance together.”

One of the tragedies of African politics is that more often than not the so-called “big men” who hold political power are wolves who prey on their own people: oppressing, robbing and debasing them. For too many years this was the case in Angola. And yet – right now – our political class has an historic opportunity to change rhythm. Will our leaders learn to march to the beat the people want to hear?

President João Lourenço came to power just over a year ago with a vow to challenge the status quo established by his own party, the People’s Movement for the Liberation of Angola, the ruling MPLA. In power for 43 years, since Independence from Portugal in 1975, the party has yet fully to honour its name and liberate the Angolan people from the poverty that debases their lives.

Under José Eduardo dos Santos, the collective leadership of the ruling party institutionalized corruption as a way of life. It began to seem that the primary purpose for those who held political power in Angola was to loot and pillage. They enriched themselves while stamping their boot in the face of critics and opponents. It was the era of insatiable and wicked wolves and the rest of society had to adapt to survive.

Over the past year there have been heartening signs of change. First and foremost, President Lourenço has begun to address the scourge of corruption, making it clear that his peers in the highest reaches of the ruling party no longer enjoy impunity. Already an example has been made of some senior figures, such as MPLA politburo member and former Transport Minister Augusto Tomás and – to the shock of many – even one of former President Dos Santos’s sons, Zenú.

Secondly, President Lourenço can be credited with encouraging greater freedom of expression and fostering new space for dialogue and accountability. He has shown good will, seemingly wanting to make things right.

For the first time in the country’s recent history there are signs that all relevant sectors of society embrace the same desire for change, starting with the dismantling of the pervasive greed and institutionalised corruption of the Dos Santos era that fueled so much dysfunction, inefficiency and violent repression.

Angola was branded a kleptocracy – and it could not have become so corrupt without the complicity of many foreign partners also infected by greed. Mutually-lucrative arrangements allowed the Angolan executive branch to buy the veneer of international legitimacy while bleeding the country dry. Under Dos Santos the state institutions that could and should underpin democracy – the legislature and the judiciary – were emasculated.

If he is sincere about effecting real change, then President Lourenço should be encouraged to open lines of communication both with his political opponents and representatives of Angolan civil society. By being seen to listen to disparate voices, and take on board the concerns of all Angolans, he could build a broad alliance beyond petty partisan loyalties to support him to overcome the challenges ahead.

First and foremost is the economy. Angola has been overly dependent on a single resource, oil. It provides 95% of export revenues. After a dip, in September 2017 when President Lourenço took office, the oil price averaged just over US $50 a barrel. Currently it averages around US $75 a barrel. And yet the rising price has contributed nothing to the country’s economic growth because much of Angola’s oil output is shipped to China to service the debt. The country has borrowed up to US $50 billion from China. Almost half of the entire State Budget for 2019 (the equivalent of more than 40 million Euros a day) is set aside to service the debt.

According to the National Institute of Statistics, Angola’s GDP dropped 7.4% in the second quarter of this year compared to the same period last year. Hundreds of companies have gone bankrupt contributing to the rise in the unemployment rate which officially stands at more than 20 percent. In fact, the number of Angolans without formal paid employment is far higher. Neither the government nor the private sector are creating enough jobs to make a dent in the high unemployment rate and most Angolans rely on the ‘informal’ sector to get by.

Part of the problem lies with the economic team inherited by President Lourenço, with many officials who served under President Dos Santos and who are wedded to the status quo. The Dos Santos ‘wolf pack’ has too many members, making for an overlarge and disjointed group incapable of tabling solutions to pry the former ruling elite from every aspect of the economic sector. These economic ‘advisors’ are betting on a continued rise in oil prices and devaluation to help turn things around. Since January this year, Angola’s currency, the Kwanza, has been devalued by more than 40% the US Dollar and the Euro.

There is no doubt that the health of the economy will be a major factor in determining how Angolans rate the Lourenço Administration. If things go badly, a rising tide of public discontent and rancour could prompt many in the MPLA leadership to silence dissent as they have in the past. The President’s good intentions are impeded by a lack of new blood in his own party to replace the old guard, who are too accustomed to a ‘winner-takes-all’ system and have a partisan mentality which allows only their comrades – other than foreign consultants – a role in running the country.

Let me give you an all-too-recent example – on October, 25, the President issued a decree authorizing the state-oil company Sonangol to spend US $50 million on foreign consultants without putting anything out to public tender. There can be no business rationale for pouring money into this bottomless pit when Sonangol has already spent millions upon millions of dollars on international consultants to no avail.

How about Constitutional Reform? 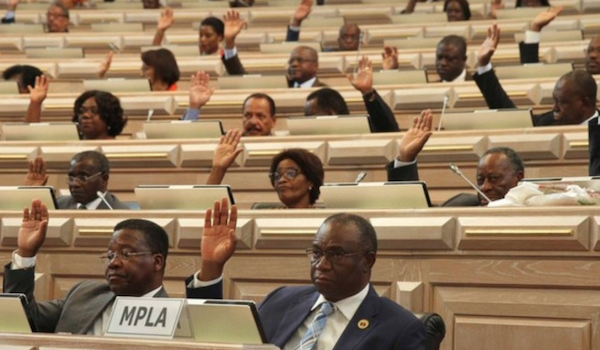 The revised Angolan constitution approved in 2010 was tailored to suit the ‘Napoleonic’ President Dos Santos, sanctioning an imperial presidency which is not subject to any oversight. In reality, the Angolan ‘democracy’ is nothing more than an elective dictatorship with an election process that can too easily be hijacked to favour the incumbent governing party.

Under the existing constitution, the electorate vote for one or other of the parties in the contest. The first name on the list of the winning party becomes President, accumulating the powers of Head of State, Head of Government and Commander-in-Chief of the Armed Forces. The President has enormous powers of patronage without check or balance, for example, the sole right to appoint senior judges without legislative approval. Thanks to a ruling by the allies he appointed to the Constitutional Court, President Dos Santos was able to remove the requirement for parliamentary oversight of his government altogether.

He defused any possibility of dissent by ensuring all involved – whether judges or members of parliament – were well rewarded. That inherited ‘status quo’ meant President Lourenço was obliged to agree US $13 million this year towards luxury cars for every member of parliament – and that’s on top of the US $77 million last year. Meanwhile in all too many Angolan homes, children go hungry.

As former US President Barack Obama once said: “Africa does not need strong men but strong institutions”. For real democracy to take root in Angola there has to be constitutional reform to establish a basic system of checks and balances on the actions of the President of the Republic. President Lourenço’s statements of good intention cannot be a substitute for the devolution of such powers to the state institutions. Instead of accepting the status quo that allows him to be just another African strong-man dispensing largesse, President Lourenço should be encouraged to be a visionary reformist, restoring the balance of powers between the democratic estates, ensuring that all from the highest to the lowest in the land, respect the rule of law.

The choice facing João Lourenço is whether to succumb to the temptation of accepting the unchecked powers granted him or to follow Mandela’s example, eschewing personal power and enrichment for the greater good. Does he have the strength to resist temptation and the power to inspire his people with real change? Let’s hope wisdom will inspire a drumbeat that gets wolves and goats dancing together.