The Danish multinational giant, Maersk, stands accused of making obscene profits at the expense of Angolan dockworkers amid calls for the contract awarded to its subsidiary, Sogester, to be ripped up.

The Port of Namibe says it is struggling to pay its workers because it is powerless to revoke a 2014 contract which gives 90% of income to the port’s commercial operator, Sogester, a joint partnership between the Maersk group’s APM Terminals and a company which is the commercial arm of Angola’s ruling MPLA party.

According to the Port of Namibe board chairman, António Samuel, “it has been an enormous struggle to safeguard workers’ pay and keep going on the 10%”. The dockworkers’ union agrees – and says it is high time this contract was torn up.

The port authority and union are hoping the government of President João Lourenço (elected in September 2017) will step in to review what they see as the untenable existing contract with Sogester, particularly in light of the known mismanagement of funds by the Angolan partner in the company, Gestão de Fundos, S.A.

When the former President of Angola, José Eduardo dos Santos, selected the Danish multi-national A.P. Moller-Maersk group subsidiary APM Terminals to revamp and run the Port of Namibe in 2005, it was required by law to have an Angolan partner. In exchange for its promise of investment and expertise, APM Terminals would own 51% of a joint enterprise named the Sociedade Gestora de Terminais (better known by its Portuguese acronym, Sogester) with the remaining 49% owned by an Angolan company named Gestão de Fundos. As well as the Port of Namibe, Sogester also operates Terminal 2 of the Port of Luanda.

A new contract, signed in 2014, gave Sogester exclusive commercial rights over the Port of Namibe’s containerized and general cargo terminal for a period of 20 years in exchange for unspecified promised investment. It gave Sogester total control of the Multi-use terminal – buildings, machinery, cranes, workers and all, and the right to 90% of invoiced income from them. Source at the port say there is no evidence Sogester has made any new investment since 2014. They say the only investment recorded in the past four years was a donation from the government of Japan.

Did the Danes realize their Angolan partner, Gestão de Fundos, was the commercial arm of the ruling party? Did they shrug off this complete disregard for conflict of interest on the grounds that turning a blind eye to corruption is the cost of doing business in Angola?

Under President dos Santos, the MPLA set up Gestão de Fundos in 1998 to manage the pension fund for the party’s supposedly-benevolent foundation, the Fundação Sagrada Esperança, which is funded directly from the state budget. The fund management company was set up with funds from the state oil monopoly, Sonangol. In short both were publicly-funded. 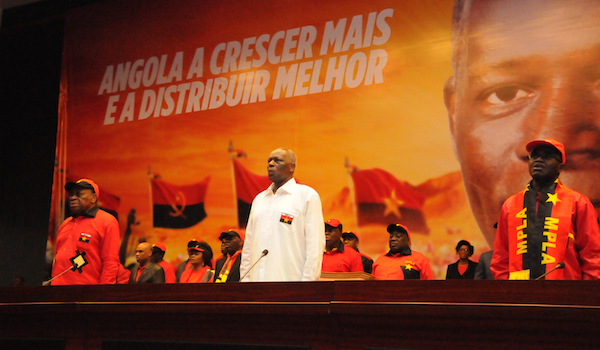 The Fundação Sagrada Esperança owns 60% of the Gestão de Fundos stock, Sonangol owns 30% and the remaining 10% was shared between MPLA nomenklatura, including the notoriously-corrupt and self-serving Isaac dos Anjos who was appointed President/Chairman of the fund management Board.

Sogester’s Angolan partner is a prime example of the corrupt nexus between the Angolan ruling party, politically exposed persons and commercial interests. Over the years Maka Angola revealed how for two decades the MPLA siphoned off at least half a billion dollars of funds from the state budget into this foundation, ostensibly set up to provide pensions for veterans of the independence struggle, holders of public office, former parliamentarians and political party leaders. The foundation channelled the money to the management fund which set up two pension investment vehicles while also entering into commercial partnerships.

Gestão de Fundos reaped huge profits, but Angola’s Tribunal de Contas (the state auditor) reported that Gestão de Fundos had no accounting procedures in place and that its management had diverted funds to private ends. In short, far from ploughing investment and commercial earnings back into the state budget, or pension funds or other good causes, the Tribunal de Contas found the profits were corruptly diverted to enrich individual party members, including the aforementioned Isaac dos Anjos.

It’s been nearly ten years since Maka Angola revealed how this former government minister turned multimillionaire had been found guilty of mis-management while serving as Chairman of Gestão de Fundos and sentenced to pay a (derisory) fine. Neither the foundation nor the management fund had kept proper accounts and it proved impossible for the state auditor to establish just how many millions of dollars of public monies had been embezzled.

In the ensuing years Isaac dos Anjos was rewarded with one public office after another: Ambassador to South Africa, Governor of the province of Huila, Governor of the province of Benguela,. Last year he was appointed as President João Lourenço’s economic adviser (for the productive sector). It’s alleged that these continued honours signify that Isaac dos Anjos may indeed have enriched himself but he first ensured that even larger sums went into the accounts of the Party and its leading members.

How else to explain that he remains in favour when during his tenure as Governor of Benguela in 2013-14, more than US $83 million went missing? Again the Tribunal de Contas found him guilty, remarking inter alia on his unreceipted personal expenses of more than US $6 million and the corrupt distribution of 76 imported luxury cars.

Sources amongst the party faithful say that for the MPLA, Sogester was a cash cow by means of which Gestão de Fundos could fill the party coffers. For as long as Isaac dos Anjos ensured that millions of dollars continued to flow in the right direction, the MPLA and its leaders could afford to turn a blind eye to any personal enrichment. And apparently this they did.

WIN-WIN FOR SOGESTER, LOSE-LOSE FOR ANGOLA

Under the current contract, Sogester receives 90% of the income from the Port of Namibe operation. For Angolan dockworkers whose labour makes these profits possible, the injustice of seeing persons of political interest corruptly enrich themselves and their party through this public-private company, while the workers barely make a living wage, is getting harder and harder to stomach.

One of the most shameful aspects of the Sogester contract is that once again the Angolan state bears the cost of any losses, while the private companies are guaranteed to lose nothing. Should Sogester go into the red at any time during the 20-year contract, the state steps in to ensure at least it breaks even. And as legal expert Rui Verde notes, “the wording of these contracts is so open to interpretation that the company has unlimited grounds permitting it to seek compensation from the state.”

The contract with Sogester requires it to pay the Port of Namibe a mere 10% of the invoiced income it earns. In 2017 alone, Sogester invoiced 2.133 billion kwanzas of which it keeps 90% compared to the international norm for an internal rate of return of around 10%. This isn’t just a win-win for Sogester but legalized pillage.

Calls for the Angolan President and government to offer redress may be futile. The fact is that the government is still in transition from the kleptocratic regime fomented by former President José Eduardo dos Santos, during which politically-exposed persons were encouraged to profit from business interests.

While the new President has vowed to crack down on corruption and demands repatriation of the billions of oil dollars diverted abroad, many of the high-ranking military and political figures who remain active at the highest levels of the ruling MPLA party are closely linked to the corrupt nexus of the past. Is it really feasible for the Angolan President to confront the massed ranks of leading members of the party he has served for decades and which brought him to power?

And what of Maersk’s complicity? As The Economist recently reported “The era when European firms could talk up lengthy “ethics codes” at home and behave badly abroad is over.” As companies like Lafarge and Novartis have found to their cost, recent EU anti-corruption and anti-money laundering rules are forcing European multinationals to self-report or face potentially crippling penalties.

It may be that Angolan dockworkers will find more sympathetic ears amongst the Europeans than the Peoples’ Party that was supposed to liberate them.

*D. Quaresma dos Santos contributed to the English version of this report.