Following his 11-day European tour, Angolan president, João Lourenço, arrived home with a staggering flight bill. He spent several million dollars on a US $74,000 an hour luxurious “flying palace” that transported him the whole time, while preaching anti-corruption at home. The distinguished Ghanaian economist and activist, George Ayittey, has a name for this kind of a leader: a coconut head.

For Ayittey, a coconut head is a leader, who, rather than run his country ruins it through folly and depraved indifference to the suffering of ordinary people.

Many Angolans saw the social media images of the world’s only private US $350 million Boeing Dreamliner 787 VVIP ostentatiousness. Owned by the Chinese  HNA Group, this plane is the world’s largest luxury business charter.

Few wanted to match it with the plane that took President Lourenço to state visits in France and Belgium, as well as a private visit to Spain. Yet, there is only one Dreamliner owned by HNA’s Deer Jet company.

Its luxury awed the press in the uneventful airport of Asturias, Spain. President Lourenço went to the city of Oviedo just for an eye checkup at Clínica Oftalmológica de los Vega, and was followed by a scandalous shopping-spree entourage.

Lourenço generated more news and backlashes at home for his extravaganza than for any accomplishments during his state visits. As a French website reported, accompanied by pictures, the presidential delegation used a fleet of three airplanes, including an executive Boeing 737 and a Gulfstream.

While the President was on tour, at home, the judicial system shutdown for a week due to a nationwide strike. The nurses are set to go on a week-long strike as of June 11, dealing another blow to the moribund health system. 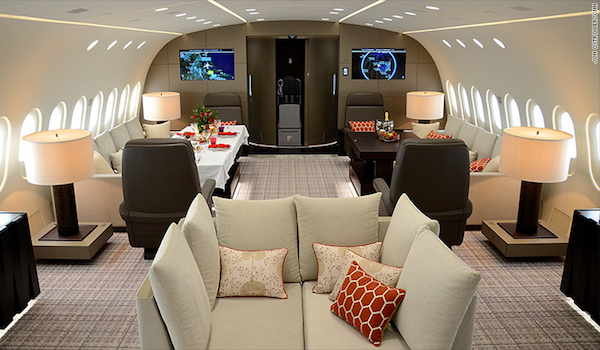 An inside view of the VVIP Dreamliner also dubbed a “flying hotel”.

There was another event, involving planes, that marred the president’s European visit, and created a social media storm at home. During an interview with Euronews, President Lourenço denied that his own government created a new domestic airliner, Air Connection Express.

However, on March 3, 2018, the state media reported that the Minister of Transport, Augusto da Silva Tomás, issued a statement outlining the government’s vision for the new airliner. He did so during his visit to Canada, where he negotiated with the Canadian company Bombardier.

Two months later, on May 5, Air Connection Express signed a formal deal with Bombardier for the purchase of six Bombardier Dash Q400 planes, for US $198 million, to begin operations in 2019. Minister Augusto da Silva Tomás took part in the ceremony, on behalf of the government.

Bombardier itself posted the news and listed the names of the private Angolan air companies which are part of the Air Connection Express consortium.

Lourenço’s administration provided the sovereign guarantee for the deal. He is now denying it exists. Who is lying? Or is it just Lourenço trying out a Jedi mind trick that “it never happened?” Why?

The state and private consortium aimed at taking over the entire domestic market from the national carrier TAAG.

Led by TAAG, it includes private air companies owned by members of Lourenço’s inner circle. When the deal was announced, this author promptly exposed some of the shareholders of the newly created company. He did so to signal that Lourenço’s team was already busy feeding at the trough. A few cronies are worth mentioning:
• The Minister of State and the President’s Chief of Staff, Frederico Cardoso, is the main shareholder of Air 26, a company that was forbidden to fly for reckless practices, such as no plane maintenance;
• The Minister of State and head of the President’s Intelligence Bureau, General Pedro Sebastião owns Mavewa, a family company that went belly up, and was grounded for a lack of safety procedures.
• The deputy head of the President’s Intelligence Bureau and Lourenço’s brother, General Sequeira João Lourenço, is the owner of SJL Aeronáutica, a family company, now taking off thanks to the brotherhood.
• Although registered in the Aruba, Bestfly, is well known as a company in which the Minister of Transport, Augusto Tomás, is one of the founders and main hidden shareholders.

When asked by Euronews about the author’s public exposé on the deal, Lourenço replied: “This company or consortium, between TAAG and some private companies will not take off, it will not happen”.

He continued: “I challenge the Angolan passengers to tell me, ‘hey sir, you told Euronews that the consortium did not exist, but today I traveled in one of its planes that you-know-who said’. Thus, this is my challenge. I do not only challenge the author of the accusation, but all Angolans, potential passengers of this fictitious company”.

Basically, being in denial will not help the president’s image. Aviation experts and political analysts are in agreement that the Minister of Transport would not have gone to Canada to spearhead the deal, without the knowledge and authorization from the President. That is why Lourenço keeps him on the job, even though the president has undermined his own minister in public.

Nevertheless, why was the president so swift in annulling a deal through an interview, but has been quiet about his extravagant flight expenditures?

In 2017, on average 20 children died a day, just at the main pediatric hospital in Luanda for lack of basic healthcare. This hospital is half a mile from the presidential palace. In the second largest pediatric center, Hospital Américo Boavida, 10 children die a day. Does this mean that the president cares more about his image and luxury extravaganza than the children of Angola?

What the heck is going on with these coconut heads of the continent?