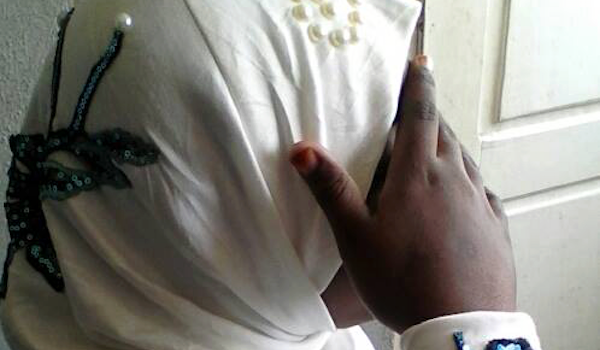 Aisha Lopes, the fashion designer, and her husband Angelica Bernardo da Costa (also known as Mujahid Kenyata) are Angolan nationals who converted to Islam in 1996.   Aisha, a diabetic, was nursing her 26-day-old infant delivered via high-risk Caesarean surgery when security forces raided the family’s apartment at 5 am on December 2 nd , 2016.

More than 20 armed officers from the Criminal Investigation Service (SIC) and the security branch burst in and detained her and her baby, along with her 39-year-old husband. Aisha says they ransacked the apartment, seizing computers, phones, more than 200 books, the couple’s bank cards and all the personal documents belonging to the couple.   “They even took my medical reports. They did not leave a single sheet of paper. “

“We are poor and the agents mocked us, saying that the head of the terrorists in Angola had almost nothing of worth in their home.”

They drove Aisha to the little shop in the Martyrs of Kifangondo neighborhood where she sells Islamic clothes.

“The shop is so small that the 18 detectives and police who accompanied me could not fit inside. They set about hitting the walls and destroying the mannequins store to see if there was anything inside them. “She recalls.

“They demanded the shop’s computer and I said there was not one. After they informed the chief that the shop was clean, I ordered them to take me to where they had taken the 15. ‘ [A reference to the 15 youths arrested and charged with plotting to stage a coup and kill the president, after meeting to discuss the book on non-violent resistance.   They were initially interrogated in Cacuaco.]

“There, they held me and my baby at gunpoint in the car for about an hour.”   Worse was to come.

Aisha Lopes was being interrogated, she could see through the window that the police officers were amusing themselves by tossing her crying 26-day-old baby in the air.   In addition to the rough treatment, the infant had no protection from the blazing sun. She says the police officers were yelling things like “are of a terrorist” and “speak to the baby in Somali” as they toyed with the distressed infant.

Over a period of about ten hours of questioning, the diabetic nursing mother was denied water and medication as well as access to her child. “I begged so much for them to bring my baby to me but they would not.”   Aisha eventually lost consciousness.

“When I came around, they gave me the baby and it was totally sunburnt, no skin left on his lips. He was in bad shape after so many hours exposed to the sun. ”   This abusive treatment of this Muslim mother and child happened just 22 days before Christmas.

Aisha Lopes said the questions that the six interrogators asked her over and over were nonsensical.   They took turns to threaten her while the other agents ‘played’ with the baby they were calling ‘they are of a terrorist’.

‘I was asked since when was my husband a jihadist. Since when was the leader of the terrorists in Angola? What was the date of the trip to Syria? When was an act of terrorism committed in Angola? They asked nonsense questions. They said the interrogation would only end when I said what they wanted to hear. “

She was shown the content of her Facebook page as proof of her radicalism, the page she says is essentially about Islamic fashion which she uses to promote her work as a designer.   Additionally, she has used her Facebook page to publicize the program of tea-party meetings with non-Muslim women to explain the Islamic religion and break down prejudices.

“They used this to accuse me of recruiting people into the Islamic state.”   In addition to Aisha and her husband, five others had been arrested.     One of the co-accused, Joel Said, had simply posted a question on his Facebook thread asking why people spoke of Muslims who defend their homeland.   “I replied: the truth is a sharp knife that hurts! They [the SIC] twisted that to say that Mujahid Kenyata [her husband] is the spearhead of the Islamic State in Angola. “ 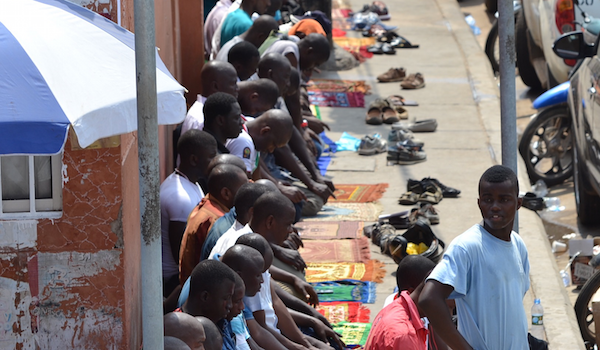 Muslims during a prayer in the Martyrs district of Kifangondo.

Aisha Lopes was detained in the disused facilities at the Cacuaco Municipal Court for 11 days.

“We spent the days sitting with guns pointed at us. The caesarean stitching opened three times but I was forbidden medical attention.   The guards (who said they were military belonging to the Presidential Guard Unit) kept their weapons on us and raised them at any movement, such as if I tried to get up or change position. “

One week after Their Arrests, the seven co-defendants Were expresso together for cross-examination on December 9 th , 2016.

“Lando was sitting next to me. I dropped the cloth that I was using to fan the baby because of the heat. I asked him to pick it up because I had trouble bending over due to the pain (of the caesarean wound) and having the baby on my lap. The five armed men behind us immediately pointed out the guns at Lando’s head and loaded [bullets into the chamber]. He kept calm, picked up the cloth and gave it to me. “

Aisha’s answers during her interrogation fit on two pages.   She says: “They gave me a two-page document to sign, then put eight pages in front of it.”   She alleges that the prosecutors made up a series of statements to flesh out what was documented as her statement. “They put things in my statement that I never said and did not read it to me. They forced me to sign it without reading it. “

She says she only became aware of this meddling during the reading of the charges at the next court hearing when Prosecutor Elisete da Graça read out the eight-page document.

“I protested, stating what I had, and had not, said.   She began scratching out the disputed sentences. The next day another prosecutor came and forced me to sign another statement.   Everything I had not said and that was scratched out the day before, was put back in. “

The prosecutor had assigned a lawyer to Aisha Lopes who introduced himself only to Dr Wilson.   He insisted that she sign the document.   “I was coerced into signing the document without being given the opportunity to read it.”

The couple, along with the five co-accused, Were formally charged on April 26 th this year by prosecutor Eugénia Santos.   The Attorney General of the Republic cited the Law on Combatting Money Laundering and Financing Terrorism (Law 12/10).

The charges against them include membership of the Islamic State terror group, known as ISIS or DAESH, having sworn loyalty and obedience to its leader Abu Bakri al-Bagdadi, and, spreading and teaching the Islamic faith in Angola.

Khadija Salvador, is the mother of one of the co-accused Joel Said Salvador Paulo, aged 22, who was detained on the same day as Mrs Lopes. She says: “The PlayStation belongs to my husband’s nephew, who was spending a few days with us. The wallet is my son’s. They [the police] even took a sum of 30,000 kwanzas I had given him to buy clothes.   After (searching) my house they went to my sister’s, where they demand the family’s phones, the children’s phones, all the books, and even the car documents.   They took everything. “

The Criminal Investigation Service concluded that of the hundreds of books seized, 38 were “of a political nature, with strong radical and subversive tendencies”.

An Angolan intelligence specialist who is familiar with the case has given his professional opinion that the charges are unfounded. Maka Angola: “There is no material that impute criminal responsibility to the accused, whether from the material or the moral point of view. The process is quite lacking in terms of investigation and therefore has no juridical consistency. “

Mariana de Abreu, coordinator of Amnesty International for Angola and Mozambique says: “The way Aisha Lopes has been treated by police authorities in Angola, with threats of beating, ridicule and mistreatment of her young son, is serious.”

Legal analyst Rui Verde describes the prosecution as an example of misuse of the instruments of what the German jurist Günther Jakobs called Feindstrafrecht: ‘criminal law of the enemy’, a concept based on the need to elaborate a special criminal law to which the state would Not subject its citizens but only its enemies.

“Applying this concept to Aisha Lopes reveals that the Angolan State considers its citizens to be enemies,” Rui Verde concludes.

Angola’s ruling MPLA has a long tradition of considering its opponents as the ‘enemies of the state and dispensing arbitrary punishment to its critics.

Aisha Lopes’s family is in stranger to Angola’s arbitrary justice.   Her father, Ndom Zuão de Gouveia Kieto, was national director of State Security until 1986.   While in that position he was accused of an attempted coup.   “The trial was secret. The family read in the newspaper that he had been sentenced to 12 years in prison and sent to Bentiaba [prison camp]. ”   The family contends that he was subsequently poisoned, in 2003 by a former DISA [security service] colleague.

Aisha Lopes and Angélico Bernardo da Costa were part of the early hip hop underground movement in Angola along with Phathar Mak, Kool Klever and Yannick Ngombo among other well-known rappers and musicians. They were known by their rapper names, Black Queen and MC Jegas.

As part of their political education, they began to study the development of Pan-Africanism and the black movements in the United States. “Malcolm X was our idol and that spurred our interest in Islam,” Aisha says.

‘We converted, believing that in Islam we would find what inspired Malcolm X.   We realized that it was different, but we kept it to the Qur’an, thank God. We left rap and stopped going to illicit places.   Aisha Lopes has been one of the most visible faces of the spread of Islam in Angola, regularly participating in radio and television debates.

The Angolan government forbids the public practice of Islam in Angola, defining it as an illegal religion and ordering the closure of mosques.

On November 26th, 2013, amid various official statements against Islam, an official from the Ministry of Justice and Human Rights, Vitorino Mário, declared on Angolan national radio: “Never at any time has the Islamic religion been recognized in Angola. Consequently, all religious activity linked to Islam in Angola is conducted outside the law. “

Consequently, those who worship Islam are outside the normal respects of freedom of religion.

According to the chairperson of the Islamic Community in Angola, David Already, “we are subjected to what amounts to theater, farce by the security services”.

“Angola wants to silence the Islamic religion in Angola by arresting the young people who are most active on social networks where they comment on and promote Islam in the context of freedom of expression,” he says.

I have argues that if the Angolan government intends to proscribe the Islamic religion in Angola it should explain itself and act transparently, rather than arresting young people for nothing.   “Reading books is not a crime,” David says.

SIC justified the Muslim arrests saying: “Terrorist acts constitute a serious threat to all states in the world, thus calling for thorough and appropriate prevention, keeping in mind that an agent or member of a terrorist group is difficult to distinguish from other people.”

The Attorney General’s Office admits that it sought advice and input from Interpol and the Brazilian judicial authorities as well as the Criminal Investigation Service and the Ministry of Foreign Affairs, as it tried to establish what the Republic of Angola’s official position in relation to Islamic State and Its leaders should be.   It got no response.   Apparently there is no official policy regarding ISIS / DAESH.

More about them and their cases will be published here shortly.

CORRECTION: a wallet with personal documents was incorrectly translated as “file documents”. Apologies for the inconvenience.