Maka Angola has learned that the Angolan Red Cross is in considerable disarray. Numerous sources have come forward to allege that the charity is riven by mismanagement and corruption. Allegations of theft, embezzlement and diversion of funds are ignored, while provincial offices and staff are starved of resources and salaries go unpaid.

The President of the Angolan Red Cross (Cruz Vermelha Angolana, CVA) is Isabel dos Santos, daughter of Angola’s President, José Eduardo dos Santos, and a reputed billionaire. When installed as CVA President back in 2006, to lead an organization with 140 staff, she announced a commitment to good governance.

“The limited resources available to us to tackle such an immense task require very careful management, and oblige us to make the best of what we have, to manage with the utmost rigor and to adopt the principles of good governance. It is important that this administration should be credible and transparent.”

She talks the talk – but does she walk the walk? Last year when her father (in power for 37 years and counting) installed her as President of the Board of the country’s most important business, the national oil company Sonangol, Isabel’s message was more or less identical. With so much at stake – after all Sonangol is the principal source of revenue for the Angolan government – it is instructive to see how well her stewardship served the Angolan Red Cross.

Sadly, not well. Maka Angola has learned that for the past seven months the 16 provincial offices of the Angolan Red Cross have not received their budget allocations or salaries. One CVA official told us, “We should be getting paid out of the General State Budget (Orçamento Geral de Estado, OGE) and this is not happening.” “Also, we are entitled to any increases approved by the government but even when we were getting paid, our salaries were frozen at the 2008 rate.”

This is confirmed by several provincial officials, who would only speak to Maka Angola on condition their names are withheld for fear of reprisals. A second source told us this: “Up until 2005, the provincial offices were given a quarterly sum, provided for in the budget, to cover costs and expenses. Since Madam dos Santos took over, we have not received a single cent of our budget allocation. To be honest, the provincial secretaries have had to cover expenses out of their own pockets, with no chance of repayment.”

Another, warning us that there would be reprisals against any whistleblower, revealed that the Angolan Red Cross had to all intents and purposes “stopped receiving international donations because some donors see our President (Isabel dos Santos) as a business magnate who should be more than competent at fund-raising. And others are reluctant to donate to Angola because they say that our financial management is not transparent.”

No funds from the fundraisers

During her reign at the helm of the Angolan Red Cross, Isabel dos Santos has organized stellar gala events to raise funds, bringing to Luanda international artists like Mariah Carey and John Legend. 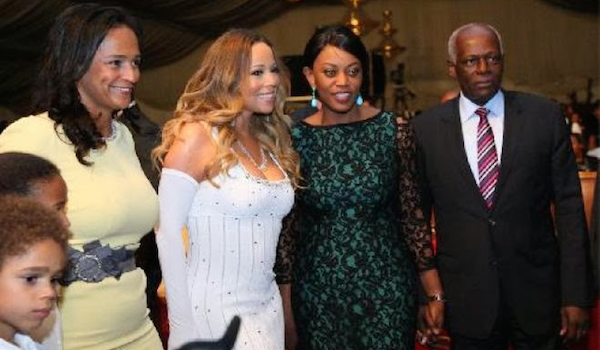 Blatant disregard for rules and regulations

Several insiders also revealed that Isabel dos Santos has ignored the organization’s administrative rules and has failed to hold internal elections to select the President and officers. Red Cross bylaws Articles 29 and 31 require internal elections every four years. Officials say this has not happened in the past six years, and suggest that CVA’s board lack legitimacy as a result.

We contacted the Angolan Red Cross’s Secretary-General, Valter Quifica for an official response to these allegations. As is customary when seeking answers from office-holders, we put the questions in writing in an email requesting his respond to the allegations about unpaid wages and the failure to conduct internal elections since 2010. Mr Quifica has declined to respond.

That is not entirely surprising as Valter Quifica is the subject of a criminal investigation into malpractise and diversion of funds. In 2014, a number of CVA provincial secretaries presented a formal complaint to the department tasked with investigating economic crimes in Angola (the National Directorate for the Investigation and Inspection of Economic Activity), regarding the alleged diversion of Red Cross funds.

The complaint supported by documentary evidence showing transfers out of the Red Cross accounts into Valter Quifica’s personal bank account was sent directly to the Attorney-General, and a case file 260/14 was opened. Nothing seems to have happened in the interim and Valter Quifica remains in his job.

Given the political sensitivity of complaining about anything to do with the President’s daughter, they waited a year and then a group of provincial representatives approached the ruling MPLA party for “help and guidance”, in the hope a discreet solution could be found.

In August 2015, the men in charge of the Bengo, Kwanza-Sul and Kwanza-Norte provincial offices made an approach to Roberto de Almeida (then the MPLA Vice-President) to brief him on the worrying situation in the Red Cross, citing maladministration, poor financial controls and paralysis under Isabel dos Santos’s leadership. They detailed the financial irregularities occurring under Valter Quifica, and demanded he be removed from his position. The signatories met with the party Secretary-General, Dino Matross, in person before they handed the letter. They received no response.

All that changed was the Valter Quifica circulated an edict around the organization prohibiting provincial officials from visiting the national head office in Luanda unless they had his prior authorization. Only two out of the 18 provincial secretaries received that authorization, the officials from Huila and Moxico, with whom he seems to maintain a good relationship.

Left out in the cold

This leaves the provinces completely isolated. One provincial source told us: “We have had only two meetings with our Secretary-General since 2006. He made lightning visits to the provinces, acting like an inspector-general, wanting to check the state of the bathrooms and review some paperwork, but there was no meeting, no opportunity for any conversation, before he rushed off.”

They are now asking openly: “Why doesn’t the Red Cross President sack this incompetent and hold elections?”

Most of the CVA provincial offices are in the same boat: they can no longer carry out their defined social projects such as educating local people about how to prevent endemic diseases like diarrhea, respiratory infections and HIV/AIDS and how they are transmitted. They are unable to organize blood donation drives. They can’t even organize transport for the volunteers willing to help with preventative measures in the campaigns against recent yellow fever and malaria epidemics.

One member of the national executive committee of the Angolan Red Cross admitted to Maka Angola (again, on condition of anonymity) that the organization desperately needs a change of direction. “We are not even given work to do,” the official said. “We’d really like to see the current leadership step down – because the Angolan Red Cross is falling apart.”

“The fact is the Secretary-General is nothing but a book-keeper for the Angolan Red Cross President. He was named by Isabel dos Santos to run the day-to-day affairs pending the appointment of a permanent candidate to allow her time to evaluate the applicants. But he won her trust, and he remains in the post to this day. He is supposed to send the National Council his accounts to review – but this never happens.”

Maka Angola’s legal counsel, Rui Verde sums up the position: “All CVA’s activity is meant to be supervised and monitored by the national president, who has executive, not just honorific, powers for this reason. Thus, when irregularities occur at the national level, it falls to Isabel dos Santos as the person within the hierarchy who has the responsibility to investigate what her Secretary-General is up to.”

And she has the most powerful backers in the country behind her including the Honorary President of the Angolan Red Cross – none other than her father, the President of the Republic, José Eduardo dos Santos. It begs the question: if Isabel dos Santos, with all her much-vaunted managerial ability, and with the most powerful individuals in Angola behind her, can manage to bring a venerable institution like the Red Cross to its knees, then what future awaits Sonangol?