Officers from Angola’s National Police and Criminal Investigation Service have been accused of executing two unarmed men, in cold blood, in the latest display of what witnesses say is the out-of-control behavior of armed police in and around the Angolan capital, Luanda.

A ten-year-old girl was also injured by a gunshot wound received as the officers fired indiscriminately in the middle of a suburban residential neighborhood at 10.30 in the morning on September 6.

Suzanete Gomes was playing with friends in her neighbor’s back yard when they saw someone trying to climb over the wall and heard shots. As they turned to run from the yard in fright, Suzanete saw she was bleeding. She had been shot – the bullet striking her in the back and exiting through her abdomen.

The child told Maka Angola that a uniformed policeman approached her and asked her if she’d been hit. “I said yes and he just went away.”

Her father, José Paulo, says his family and that of their neighbor Carina, abandoned their homes in fear of police retaliation as their children had witnessed what had happened and could identify the officers involved.

An investigation by Maka Angola into the shooting incident found multiple witnesses able to identify the officers involved. One young man (name withheld) had been questioned by the two officers prior to the shootings. He said they appeared on motorcycles. One was wearing the uniform of an officer in the National Police while the other belonged to the Criminal Investigation Service, both believed to be based at Police Station 44.

“They told me they were on the trail of two thieves. They came one after the other on different bikes. I know their faces well.”

“One of the suspects tried to hide in my house but my father spotted him and threw him out straight away,” the witness said. “He couldn’t even speak. He wasn’t armed and he wasn’t carrying anything at all with him.” “Right there, outside, he was shot down.”

A civil rights activist, Laurinda Gouveia, was on the scene within minutes of the shooting. She saw that the two victims had been corralled in a walled back yard, unable to scale the high walls, leaving them at the mercy of the two officers.

“Their bodies were right up against the wall. The boy in the yellow t-shirt was named as Bruno Lamba. He took one bullet to the head, another to the chest and a third to the right arm. The young man in the blue jacket was known as Tomás 9-2-3, and he belonged to a gang known as the ‘Perturbados’. He had been shot in the back of the head, execution-style.” 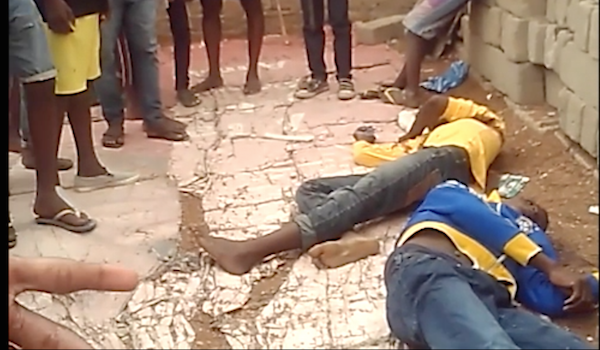 The bodies of the executed young men.

Maka Angola was shown a video of the bodies, clearly showing the wound sites which are just as Laurinda Gouveia described. Many local residents told Maka Angola they were too afraid to speak on the record. One witness, who declined to give her name, stated “the two boys were just shot right there like a firing squad.”

The bodies were left in the back yard for the next four hours until elements of the Criminal Investigation Service came to remove them. Witnesses said family members of one of the young men came to the scene and covered his body with a sheet, but refused to speak to anyone.

This portal spoke to a witness who categorically identified police officers as responsible for the shootings. “Everyone here saw them and knows that they are policemen. The uniformed officer was running through here with a gun in his right hand. The SIC officer likewise. We all saw them. And another officer who came later from a different unit, told us that they intended to kill [these boys].”

Meanwhile Suzanete was taken by neighbors to the Kapalanca hospital in Viana, where the only treatment given was to bandage her flesh wound. Her father, José Paulo, was angered that they did not take an x-ray or do anything further to help the child, advising him instead to take her to a private clinic. She had clearly lost a lot of blood and her indignant father went straight to the Divisional Command of the National Police in the municipality of Viana to submit an official complaint and demand appropriate medical treatment for his daughter.

“They told me they would identify the shooter and determine if he was a police officer or not and I should come back the next day.” When José Paulo returned, he met the Divisional Commander, Chief Superintendent Francisco Notícia. “The commander expressed his surprise and summoned the Police Station 44 Commander to find out what had happened… the Station 44 Commander said he had no knowledge of the events there.”

The divisional commander then gave orders for the wounded girl to be taken to the Central Forensic Laboratory for examination after which she could be treated at the Multiperfil Clinic and the cost would be covered by the National Police. “Commander Notícia told me they would give priority to treating the girl while investigating the situation,” said José Paulo.

Maka Angola’s legal adviser, Rui Verde, says that this is one of many complaints of summary execution by police officers reported over recent months. “There’s mounting evidence of a sub-culture of police officers prepared to torture and even kill suspects, without following due process,” says Verde. “This has to be stamped out.”