END_OF_DOCUMENT_TOKEN_TO_BE_REPLACED

Presidential Guards at the Service of Private Business

The trial of 15 Angolan presidential guards, accused in connection with a petition in which they demanded better salaries and working conditions, has drawn attention to a web of corrupt practices in which military officers set up private business with state funds as their capital, and using soldiers as their labourers. The guards on trial are members of the Central Protection and Security Unit (DCPS), a unit that was set up in 2004 under the auspices of the Military Bureau of the Angolan Presidency. Its supposed function was to protect infrastructure rehabilitation projects throughout Angola, as part of the National Reconstruction Office (GRN) that was attached to the Military Bureau under the leadership of General Manuel Hélder Vieira Dias “Kopelipa”. The DCPS was meant to protect the Chinese companies and workers who were involved in the projects. These projects have been worth more than US$10 billion, financed by the Chinese […]

END_OF_DOCUMENT_TOKEN_TO_BE_REPLACED 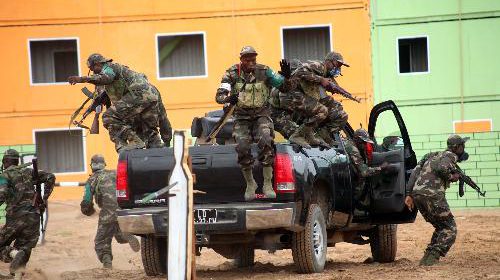 END_OF_DOCUMENT_TOKEN_TO_BE_REPLACED

The Presidencys Military Bureau and the Kidnappings

It is now two weeks since Alves Kamulingue, 30, was abducted while walking around downtown Luanda at midday on May 27. Kamulingue was on his way to a demonstration that had been scheduled to bring together former members of the Presidential Guard Unit (UGP) and war veterans to demand the payment of their pensions. On May 29, his friend Isaías Cassule, 34, one of the organisers of the protest, was also seized at dusk in the Cazenga district of Luanda. Kamulingue’s wife, Isa Rodrigues, has received anonymous phone calls that have claimed the missing men are in a police unit somewhere on the outskirts of Luanda. These rumours have started to circulate, including among journalists, contradicting other rumours that have spread on the internet claiming that the men have been executed. The calls come from unknown numbers and are then switched off so that the families cannot call back and […]