More than 30,000 refugees from the Democratic Republic of Congo (DRC) are housed in two temporary reception camps, Kakanda and Mussunga, in Lunda-Norte province.

The United Nations High Commissioner for Refugees (UNHCR) estimates that about 500 refugees are arriving in these camps each day. Congolese citizens are continuing to cross the border to escape the current conflict in the Kasai region, which erupted in April last year.

Last April, in addition to the refugees, around 180 armed men from the Congolese armed forces and police also escaped from the clashes between government forces and the Kamwina Nsapu militia, according to the data this website received from the local authorities. The same sources say that more than 100 members of the Congolese forces managed to escape the control of the defence and security forces, and ‘disappeared’ in the Angolan town of Dundo, while the rest were repatriated.

In the same month, on April 14, the rebel group attacked the Itando border crossing point in pursuit of members of the Congolese armed forces and police forces, and have since carried out several attacks on Angolan territory.

Maka Angola has, over several days, verified the situation and heard chilling testimonies in the reception centers of Kakanda and Mussunga.

Catharine Tombe, 47, was forced to watch her father being killed by Kamwina Nsapu militias.

Before that, unknown numbers of militias took turns to rape his mother in his presence.

“My father, could not bear seeing the militias rape his mother and tried to fight. They cut off his head with a machete,” she says.

Catharine pauses to catch her breath. She admits she lacks the courage and strength to revive the barbarity she witnessed. She gazes at a child, her niece, who looks about seven. The child survived as if by a miracle. “The militias poured fuel oil on the girl’s body, locked her inside a house of sticks and set it on fire. She survived, despite the burns.”

Children are the ones who suffer most from war. According to information provided by UNHCR, 53 percent of refugees in both camps are children. Hundreds of children, separated from parents and family during the escape, are housed in four tents in the Kakanda camp.

Mbumba-Ntumba, 65, housed in the Kakanda camp, recalls the horrors he experienced in the early hours of one morning in April.

“I was in my house when a group of people commanded by the chief of the area where I live came in and began to beat me. They cut my left arm with a machete and continued to beat me with the machete on my head until I was unconscious.”

He tells how he was rescued, still unconscious, by volunteers from the International Red Cross who took him to the Angolan border.

Odia Rosa, 40, described the ineptitude of the Armed Forces of the DRC. Her village of just over 1,000 inhabitants was attacked in April, a few kilometers from a government military base.

“The soldiers knew that the population was being attacked, but they did nothing. [DRC President] Kabila is to blame for this. The more war, the longer he stays in power,” she says.

Amid the violence as she fled to Angola, Odia Rosa was separated from her 15-year-old daughter. For four months she has been hoping that her daughter survived. Whenever new refugees arrive, Odia runs to meet them, to see if she finds her daughter or someone who might have news of her.

The Kamwina Nsapu militia began its rebellion last year in Eastern Kasai province with support among the Baluba and Batetela ethnic groups, against the government forces but also against citizens of other ethnic groups. 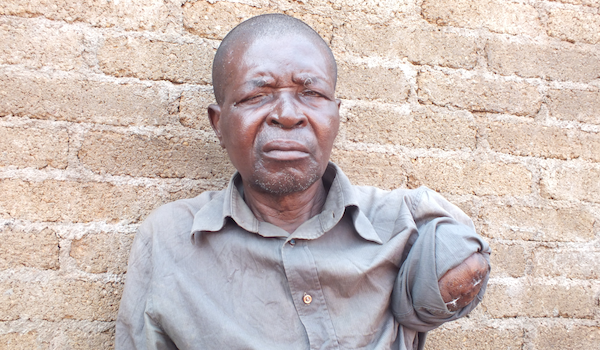 Shortages in the camps

In the reception camps, the shortages are plain to see. There are no mattresses. Adults and children sleep on the floor and some women, including pregnant women, sleep in the open because shelters and tents distributed by UNHCR are insufficient.

Refugees receive only one meal of porridge and beans a day. Many prefer to eat only at 4:00 p.m., “to balance the stomach”.

Dos Santos as a stabilizing factor?

Since Angola attained peace in 2002, the country has portrayed President José Eduardo dos Santos on the international stage as a major factor of political-military stability in the Great Lakes region, of which the DRC is a part.

However, the reality on the northeast border of Angola reveals the state of disregard and neglect of the Angolan Armed Forces, especially its Military Intelligence and Security Service (SISM).

Last April, local military personnel, surprised by the attacks and unprepared, even carried out raids on young civilians in Lunda-Norte, particularly in the Cuango municipality. According to several denunciations made by local citizens and relatives of the young people concerned, these youths were sent, without basic training, to fight against the Congolese attackers,

In the Lundas, local authorities have noted that the SISM’s regional representative was evicted from the residence in Saurimo that had been rented by the military intelligence, after rents were unpaid for two years. “How is it possible for Military Intelligence in Luanda to know what is really going on at the border, when their representative had to leave the area due to non-payment of rent?”, questioned a local authority on condition of anonymity.

Meanwhile, the situation in Luanda is no less chaotic. Officials in key positions at the SISM have not taken up their posts since they were appointed by the President of the Republic and Commander-in-Chief José Eduardo dos Santos in 2013, creating an unprecedented climate of demoralization. The infamous head of SISM, General José António Maria “Zé Maria” has prohibited them from signing any documents. Some were ordered to leave the SISM and sent home, even though they had not been dismissed by José Eduardo dos Santos. These include, for example, Lieutenant-General Koquelo, Chief of Intelligence of the Army Command; Brigadier Calongo, deputy chief of Intelligence of the General Staff of the FAA; and Brigadier Simba, head of the Operations Directorate of Military Intelligence.

On 27 June, General Zé Maria bypassed the authority of the Commander-in-Chief, to dismiss, on a whim, Brigadiers Mbuila João Minguela and João Kaluhapa, respectively heads of the directorates of Military Counterintelligence and Military Intelligence Operations in the Army Command. The president alone has the competence to remove general officers.

Unaware of this situation, many Angolan citizens along the border continue to harbour the idea that an Angolan military intervention in the Kasai region may restore some order and stop the influx of refugees into Angolan territory.