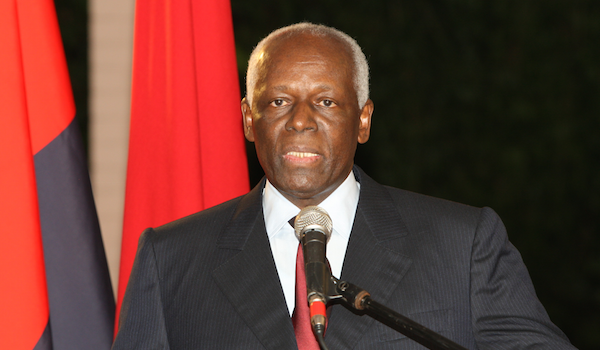 It is right and proper that anyone who has served as head of state or government should be accorded due honors upon exiting the job. The peaceful transition of power is a cornerstone of democracy and those who have reached the pinnacle and who willingly step aside when their time is up, are rightfully guaranteed some special treatment for the rest of their days. It’s a mark of respect for their service.

With the prospect of a voluntary exit for José Eduardo dos Santos, who has held power in Angola for an astonishing 37 years, few would be so churlish as to deny the man who likes to call himself “the Architect of Peace” the consolations of orderly retirement.

What is customary around the world? No doubt his name will emblazon important civic works. Perhaps he is granted an annual pension and a security detail for life. Perhaps the state picks up the bill for a presidential museum or library, staff and office allowances. Perhaps the former President gets a seat in the upper chamber of parliament, an honorary position at a prestigious university or inclusion in a think-tank. It almost goes without saying that the state will guarantee all medical treatment and expenses. And at the very end, a state funeral.

However, the Angolan ruling party, the MPLA, is proposing for President Dos Santos, goes much further. First, it wants to confer President Emeritus status. This suggests that the outgoing head of state expects to retain some kind of ex-officio political role, particularly as he retains his position as the ruling MPLA president.

That could be problematic in the long run – one can imagine the return of factionalism with the Dos Santos cadres pitted against the Lourenço cadres. The MPLA has a sorry history when it comes to dealing with factionalism. In fact termination was preferred to conciliation – as the Nito Alves faction found to their cost on May 27, 1977, when tens of thousands of people were massacred to settle internal scores.

Some would argue that it is right and proper to offer the outgoing head of state a pension for life. However, in a cash-strapped Angola, whose economy has been brought to the brink of bankruptcy by the present regime, is this strictly necessary? Especially when there is no doubt that President has become extraordinarily wealthy during his term in office, by means in which remain unclear.

One Member of Parliament, Irene Neto, the daughter of the country’s first post-independence President Agostinho Neto, has spoken out against this in the National Assembly, saying:

“In this instance, we know that finances will not be a problem for the future ex-President and first lady. It is fair that they should also benefit from these perks? No-one can argue that the current presidential family is poor, and for that reason they are more than able to attend to their political and personal needs with the dignity and decorum consistent with their high-ranking roles.”

Some in the MPLA are aghast that Irene Neto has spoken out like this – after all didn’t she and her family receive benefits as a result of her late and much-revered father having served as President? They cry “betrayal”, “ingrate” at her while conveniently forgetting that any handouts to the Neto family were given as a personal favor from his successor.

One thing we can be certain of: when a head of state or head of government needs a law guaranteeing them lifelong immunity from prosecution, they have clearly done something wrong and they fear retribution.

It is not a coincidence that Angola’s ruling MPLA party is introducing a bill safeguarding José Eduardo dos Santos and his administration from the legal consequences of their actions while in power. The party structures have been entirely complicit in almost four decades of behavior that could already have resulted in criminal charges if only the Angolan “Justice” system were independent, impartial, and based on the rule of law.

President Dos Santos treated the national treasury as though it were his private bank, doling out favors to all those whose loyalty he wished to buy. And subsequently using those favors as blackmail, in the event the beneficiaries ever try to blow the whistle on his misdeeds. No one dared to speak out because they all had their fingers in the pie. 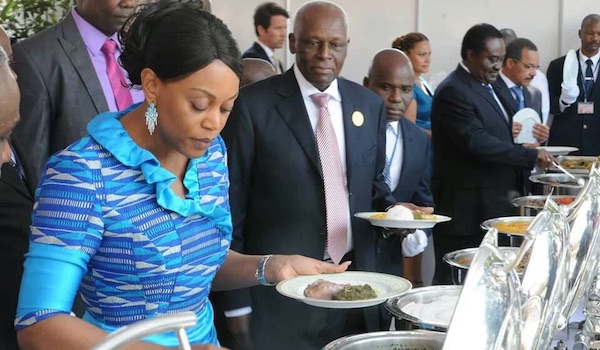 Dos Santos and his entourage feasted after his inauguration in 2012.

Any organization outside Angola that has had to do business with the Dos Santos administration is cognizant of at least a few of their habitual criminal behaviors. For instance, the ‘fees’, ‘permits’, and ‘fines’ required as a matter of course, inflating the cost; the requirement to partner up with nationals, individuals or businesses, before being awarded a contract. This is not the limit to their corrupt endeavors.

How does a serving General in the armed forces accumulate luxury homes overseas and finance expensive private educations for all their children in the world’s most elite institutions?

How does a member of the MPLA central committee or of Parliament afford luxury vehicles and first-class travel overseas?

Why is it that the President, the Vice-President, every government Minister, provincial Governor and so on and so forth down the ranks, have the ability to own a business and accumulate wealth and assets that are not commensurate with the published pay rate for their jobs?

Intelligence organizations, corruption watchdogs, and the like have a pretty good idea. They have examined the evidence, crunched the numbers, and concluded that Angola is one of the most corrupt countries on Earth. Until a formal criminal investigation is launched in Angola itself, it is impossible for Angolan nationals to even begin to comprehend the magnitude of the economic crimes committed against the national interest by those who won power first by bullet, then by ballot.

So why guarantee lifelong immunity for prosecution to a man widely suspected of larceny on the grandest scale? Perhaps because only by ensuring he remains in power and in control of both the national economy and the justice system can the MPLA draw a veil over what has already occurred. The party’s reputation and future viability would otherwise be in grave danger.

Conservative estimates suggest that a large percentage of Angola’s main source of income, the revenues from its reserves of oil and gas, has been diverted. According to the IMF, US $32 billion went missing between 2007 and 2010 alone! Let’s be clear. Money from an asset that belongs to all the Angolan people has been stolen for the benefit of the few, the elite. As the old adage says: the fish rots from the head down.

How did the President consolidate his grip on power? How does anyone rule for so many years without any challenge from younger, better educated, and ambitious ‘young Turks’? There’s what you might call the ‘Mafia’ model: use a monopoly on force to instill the threat of death or extreme violence not just to the individual but to all their loved ones. And there’s the ‘Patronage’ model: buy their loyalty and make them complicit in the illegal activity. Any dictator worth his salt knows the playbook by heart. As a result of the distribution of wealth beyond the dreams of most men, the levers of power are all under the control of the Dos Santos MPLA, whether government, military or judiciary. All kept in line by carrots and sticks: a share of the loot versus potential persecution or worse.

The Angolan Constitution was supposed to prohibit members of government from profiting from additional positions or occupations. Instead from the President down, everyone who owes their job to the ruling party uses it as a platform for more lucrative activities. How many own businesses? How much of their attention is given to their nominal job?

How does a man like José Eduardo dos Santos become an alleged billionaire? How is it possible that his immediate family own or are in charge of innumerable businesses linked to state money and state projects? They have woven an intricate web of legitimate and shell companies registered here and there around the world, obscuring ownership by installing paid flunkeys and ever more distant family members as partners or board members. How did they even get the seed money to start those businesses?

In the case of the President’s daughter, who proudly affirms she is Africa’s first female billionaire, the ‘seed money’ was traced to a loan from Sonangol, the state-owned oil monopoly in which she now controls in the name of her father.

The family businesses change their names or change hands so frequently that it would take international cooperation, expert investigators, forensic accountant and unlimited time and funds to trace all the links and money transfers going back over nearly 40 years. They have exercised such a significant level of diffusion and effort that strongly suggests an intended cover-up.

For years the first family and their entourage have arrogantly assumed they can do as they wish and get away with it all. Perhaps their confidence is wavering in the face of an avalanche of news reports, fueled by leaks from some of their cohort, detailing some of their financial misdeeds. Hence their pressing need for a law that would guarantee permanent impunity. If they had done nothing wrong, had nothing to hide, nothing to fear, such a guarantee would not even be necessary.

When the incoming administration faces the wrath of a deceived public and begins to grasp the scale of the crimes committed by their predecessors, how long will it be until they repeal the immunity law and go for the jugular? And there will be no guarantees of immunity overseas. With the former Vice-President and a presidential daughter already indicted in separate corruption cases in Portugal, the number of safe hiding places is diminishing. The piles of cash sitting in foreign offshore banks could be confiscated, the erstwhile ‘first family’ summoned to trial.

Frankly, even if the MPLA steamrollers this law into effect, it may be a wasted effort. The ancient Greek philosophers expressed it best: the wheels of the gods may grind slowly – but they grind exceedingly fine.