Several hundred Angolan peasants and their families reportedly face the prospect of a state-sponsored famine in the northeastern diamond region of Lunda Norte thanks to the decision to destroy villages, homes and crops to expand mining operations.

The Angolan diamond mining conglomerate, Sociedade Mineira do Cuango (SMC) is accused of ordering the systematic destruction of hundreds of food crop plantations in the Cafunfo area (Cuango municipality), with the local MPLA administration ordering the compulsory removal of the villagers and destruction of their homes, cash crops and vegetable gardens.

Villagers complain that compensation for their destroyed harvests is wholly inadequate, amounting to 60,000 kwanzas (about US $115) in the informal exchange rate) and some empty water barrels.

“The peasant may have planted crops in an area of between one and four hectares, but each only gets a maximum of 60,000 kwanzas sum, regardless of the size of the area cultivated,” says one of the administrative officials involved in the process.

Data collected by Maka Angola from the Cuango municipality shows that in the past year, SMC has ordered the destruction of 402 plantations. And the Cuango Municipality Agricultural Office has a further 123 plantations on its list for clearance in the coming days. In this instance, the proposed clearance involves the demolition of the entire village of Muamuxico, along with several neighboring homesteads.

“The destruction orders come from Mike Weir, the SMC Operations Director, but he is merely complying with orders from the SMC board of directors in Luanda,” a local official revealed to Maka Angola, on condition of anonymity.

Our source said the order is sent to the Municipal Administrator, Angélica Umba Chassanga, who then instructs the official in charge of Agriculture, João Eugénio to go out and pay the flat-rate compensation to those affected. “People can’t argue with João Eugénio because he is always accompanied by heavily-armed police, who threaten them if they protest.”

Diamond mining in the Lundas has brought little but violence and misery to local communities. The precarious way of life of these communities, dependent on subsistence agriculture in an area that lacks any other form of employment, has seen many people, young and old, take part in ‘garimpo’, the local term for unregulated diamond prospecting. If they are caught by the private security firms employed by the diamond mining company, the maverick prospectors are subjected to violent punishments, including beatings and killings.

The Muamuxico village chief says “it was José Eduardo dos Santos’s government who told people around here that everyone should dedicate themselves to growing crops to put an end to famine in the region. They ordered our sons to stop prospecting for diamonds and become farmers instead.”

“Now that same government is authorizing the SMC to destroy our crops,” complains Soba [traditional authority] Muamuxico. “The man is a hypocrite. His government has only respect for diamonds not for peoples’ lives. We have to continue growing food – until they come and kill us”, he adds.

“When the diamonds run out, these companies will disappear, leaving only piles of dirt or holes in the ground behind them,” says the Soba who is organizing a protest march against the demolition of villages and destruction of crops. He says people are ready to stand up and die. 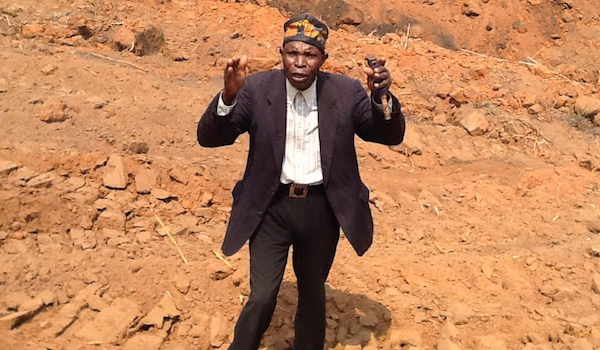 Razing the village of Muamuxico

“SMC forbade us to take water from the rivers, even though our village lies between the Xacanga and Kamaconde streams” says Paulino Mwatxingungo, Soba Muamuxico’s deputy.

“The company informed us that it will destroy our homes and take over the village. The Soba tried to speak to the (Municipal) administrator about this, to say that if the villagers are forced to leave they should be relocated along with their homes and the trees they planted. Otherwise they prefer to die there, where they were born and have always lived.”

“The diamonds they find here in the Lundas have brought no benefits to the people. Muamuxico doesn’t even have a health post or a school. Between them the government and these mining companies just ruin us and steal from us,” says Mwatxingungo.

From the villagers’ point of view, the land is theirs, regardless of any compensation offered for it. Their village has 74 homes and is home to some 620 people who have planted 87 fields of crops around it, including 50 mango trees, 30 avocado trees and 90 palm trees along with other tree species around their kitchen gardens (where they grow their own food). All of this is slated for destruction.

“The administrator [Angélica Umba Chassanga] tried to convince the soba that it is normal for entire communities to be evicted and that she had witnessed operations to remove communities in her own village in Nzagi.” They disagree.

For the soba and his villagers alike, their crops are their only means of subsistence. “My home and everything I have to support my family comes from my crops”, says Soba Muamuxico. He says the government has never given him anything but party banners and a hat, failing to deliver on their promises of a uniform and the wages due to a local chief.

Other peasants in the region have similar complaints: Paulina Xacole, aged 45 anos, was recently informed by SMC envoys that her plantation, alongside the Txameia creek, would be destroyed in the near future.

“The company bosses and the government must want us all to die of hunger,” she says. Paulina says she will not accept money or empty vessels for her land. “The land is everything to me, it is my husband. Everything I need comes from my land, even the schoolbooks for my children to study. I cultivate and sell yams, millet, peanuts, sweet potatoes, cabbages, bananas and a whole lot more.”

Luzia Joel, aged 38, says SMC already ordered the destruction of her crop fields on along the banks of Txameia creek, where she grew mainly yams. “I didn’t get anything. When they destroy all that remains of my crops, I’ll have nothing left to grow. God only knows what will happen to me.”

In the past three months, Maka Angola has also received details of the destruction of a further 98 crop plantations along the banks of the Pone and Lué rivers as well as Kamilengo, Kamalowa and Sachi creeks.

Maka Angola contacted the office of the SMC director of Mining Operations to convey these complaints but was unable to obtain any response to a single question. A telephone conversation with a subordinate of deputy director Firmino Valeriano, resulted in a blanket refusal to respond to questions, even if put in writing.

All have made considerable multi-million dollar fortunes from their involvement.

*Jordan Muacabinza, from Cuango, contributed to this report