“Be careful! Be VERY careful!”

That was the late-night advice to award-winning Angolan journalist and human rights defender Rafael Marques de Morais from Vice-Admiral Pedro Chicaia, the Cabindan brought to Luanda as the right-hand man and special adviser to the Angolan Navy Commander, Admiral Francisco José.

It was an unusual time to call – a Sunday evening at 9.27pm – and an unusual response to enquiries into allegations of the illegal expropriation of land in the municipality of Viana.

As Maka Angola revealed in a special report this week, the disputed land is a 15-hectare plot in Mucula Ngola, Viana province, registered in the name of Garcia João Camangumba who gave his sister, Helena João Teka power of attorney to manage his affairs when he became ill in 2012. Soon afterwards Helena’s home was demolished at night, killing her two young children, during what is alleged to have been one of several illegal forced evictions aimed at clearing poor peasants off the land for the benefit of someone linked to the highest levels of the Angolan government.

Helena has spent the past four years in what has (so far) been a fruitless fight for justice for her children and surviving family. As the Maka Angola report revealed, one of those whom she approached for help was Vice-Admiral Chicaia.

Chicaia had already told the journalist his version of events, referring to Helena as a “bandit’, and lauding himself as a “great soldier”. He offered no explanation as to how he managed to acquire some of Helena’s land nor could he produce any documents to show that he had the right of possession of the parcel of land he now claims as his own.

And now this Sunday evening call. Is he trying to intimidate Mr Marques? The journalist respectfully asks the Vice-Admiral, if this is a threat. His response: “No, of course not. But you should be very careful”.

Why? Chicaia justifies his warning thus: “Be careful of that woman. She could ruin your life. She has complained about us to the Governor (the Governor of Luanda, General Higino Carneiro). People are looking for her. We thought she had fled to the Congo, but it turns out she is here.” And chillingly he adds: “Now we know where she is.”

Again, with the greatest respect, Marques de Morais asks him why he should not hear what Helena Teka has to say.

“Careful she doesn’t dirty you, because that woman has already dirtied a lot (of people),” says Pedro Chicaia. “She likes to give her breasts (her body) to other men, because of that land. She has already ruined the life of Brigadier Afonso. She tried to corrupt me, but I am a married man, and strong. That woman is a ‘feiticeira’ (a woman who casts spells).”

Rafael Marques de Morais has interviewed Helena Teka several times, testing her story against that of other interviewees. Initially skeptical of her account, he became convinced she was telling the truth after she produced documentary evidence and he found eye-witnesses and the local headman corroborated her account.

In a nutshell, she accuses the President’s Chief of Staff, Minister of State Edeltrudes da Costa, who has created a massive country estate across the road, of being behind the illegal mass demolition of homes and violent eviction of the rightful owners of the land.

One source told Maka Angola that da Costa had complained to his counterpart at the Office of the Presidency, the other Minister of State and Head of the Intelligence Bureau in the Office of the President, General ‘Kopelipa’, about the wrong sort of people on ‘his’ land. It’s alleged that Kopelipa passed this on and word went down the chain of command, resulting in a police operation to clear the land.

What wasn’t revealed during the Maka Angola report, was that Helena Teka had also spoken, in detail, of how during her attempt to regain her land, she had been introduced to Vice-Admiral Chicaia by a go-between, a military policeman known to her as ‘Cobra’. After initially promising to help her, she alleged Chicaia made sexual advances, pursued her relentlessly in spite of her demurrals, and eventually threatened to kill her when she refused point blank to offer sexual favors.

Not wanting to divert attention from the land issue, the author made no mention of the sexual harassment allegation in his report. But he had questioned Helena about the individuals who had promised help along the way, amongst them Brigadier Afonso. Helena said repeatedly that the only person in uniform who seemed genuine in offering help had been the Brigadier. She says he was the only one who did not try to exploit her situation.

After the first assault on her land and home by police, she says ‘Cobra’ sought her out. Saying he was from the military police, ‘Cobra’ offered to put her in touch with someone “higher up” who might be able to help her. It turned out this ‘help’ might be forthcoming in exchange for a piece of her land. 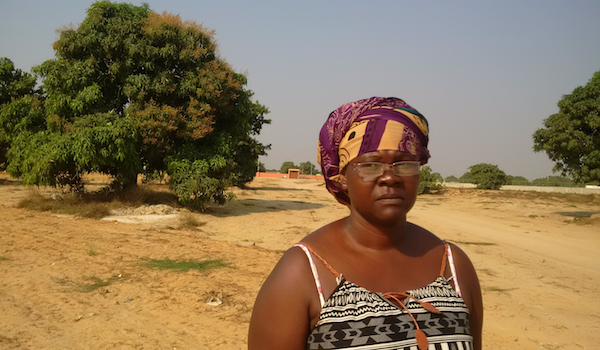 Helena Teka in her plot of land where her house once stood.

It was ‘Cobra’ who introduced Helena to Vice-Admiral Pedro Chicaia, who was accompanied at that meeting by Brigadier Afonso. Given her favourable comments about the Brigadier, Rafael Marques asked whether they were friends, or something closer. Had there been any intimate relations between Helena and this Brigadier? Her answer was an emphatic “No!”

He says her manner was direct and firm. She told him: “I lost everything. Everything. Why would I want a man in my life, lover or husband?”

Helena’s two young children died when their home was demolished while they slept. Her brother, Baptista João, who was babysitting, had gone to remonstrate with the police supervising the operation and was shot in the back and killed before he could go back and rouse the children from their beds. Another brother, José Samuel, was shot in the leg. They were thrown off their land and forced to seek refuge where they could, their homes and every possession destroyed. When Helena went back to see if there was anything she could retrieve, she was raped by elements of the police Rapid Intervention Police who were guarding the parcel of land. “How could anyone accuse me of offering myself to men in uniform after that?” she wonders.

In fact, Helena has complained repeatedly about the attentions of Vice-Admiral Chicaia. She says she reported him to the Naval Command, as well as to General Simão Carlitos ‘Wala’, the commander of the Luanda Military Region.

“It got to the point where he (Chicaia) told me directly I should be with him. I told him I would prefer a thousand times over to be with a prisoner sentenced to 40 years than with one of the (uniformed) killers,” says Helena. “After all I’ve been through, why would I?”

“He called me an ‘ass’ and offered me 60,000 kwanzas. Still I refused. I told him I would rather eat the slum flour that I grind and sell for a living.”

The only response to Helena’s complaints came last May when a man with the rank of Colonel told her that his advice was that she should just sleep with the Vice-Admiral. “He said I should let Chicaia taste me, even if just the once. And I told him I am not a sauce to be tasted to see if there’s enough salt or not.”

Helena told the author that she had been threatened that she would be made to suffer, that she would be killed. Marques de Morais admits that he failed to take this seriously – until he heard Vice-Admiral Pedro Chicaia’s chilling words for himself. “People are looking for her (…) Now we know where she is.”

Marques de Morais says now, “How is it possible that senior ranks in the Angolan Armed Forces can be so base and so insensitive to the condition of the very people they are sworn to defend?” “Initially, I found it impossible to believe that a Vice-Admiral – one of the top brass – could be so crude as to believe that a peasant would be easy prey for his worst instincts.”

Meanwhile, Chicaia has helped himself to a portion of Helena’s land and is building a property there.

The author ruefully admits he too is likely to be sued. “I’m sure now they’ll come after me for reporting Helena’s story and for recording and making public Vice-Admiral Chicaia’s remarks.” “He said he could ruin my life – a threat like that could be interpreted as a threat against my person.”

But people like Helena João Teka need to have their stories told. Powerful adversaries have stolen from her everything she held most dear – her land, her home, her brother and her children. What else does she have to lose? This is what gives her the strength to stiffen her back and fight these powerful men who think they can trample over the poor.

Unlike some, she doesn’t want a fortune, a mansion or the trappings of luxury.
All Helena Teka wants is Justice.