At a time of prolonged economic crisis, Angola has an interesting way of prioritizing who gets first dibs on its dwindling supply of foreign exchange.

Angola’s President José Eduardo dos Santos recently told the central committee of his ruling MPLA (People’s Movement for the Liberation of Angola) party that the government had not received any contribution from Sonangol (the national oil company) since the beginning of the year due to the sharp decline in oil price. He added: “the income Sonangol does derive is barely enough to pay its own and the State debts.”

Dos Santos admitted that this was causing a foreign exchange crisis for the National Bank of Angola, the BNA, which was only able to muster approximately US $300 million per month. That comes from receivables from foreign oil companies working in Angola, who are required to exchange their national currencies into Angolan kwanzas to pay in-country expenses. The President said the receivables from these transactions were “clearly not enough to meet the needs of the State Budget or the commercial banks.”

“Clearly not enough”. Particularly when a full third of all the US dollars passing through the BNA, is diverted directly to one creditor on the explicit instructions of the President’s daughter, Isabel dos Santos – the current President of the Board of Sonangol. Since the end of June the BNA has been transferring US $100 million each month to pay down an existing billion-dollar debt to one particular creditor, the DT Group, a subsidiary of controversial Swiss-based multinational, Trafigura.

For the past seven years, DT Group (which includes Pumangol) has enjoyed what is considered one of the world’s largest swap deals. It exports an unknown quantity of Angolan crude while at the same time having a near monopoly to import all the fuel derivatives required to meet Angola’s domestic needs.

This advantageous deal was achieved by three of the President’s closest business associates entering into a consortium with Trafigura. Manuel Vicente, ‘Kopelipa’ and ‘Dino’, dubbed the ‘Triumvirate‘, are widely believed to be the front-men for the President’s business interests, while amassing eye-watering fortunes for themselves. 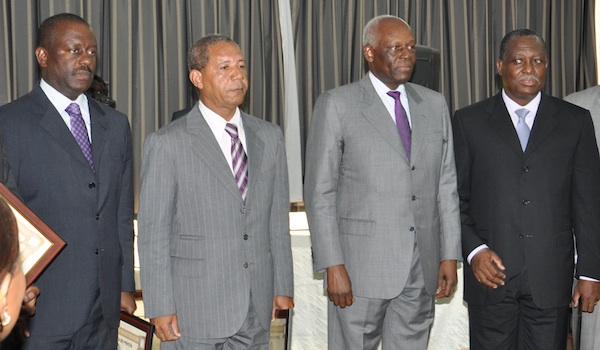 Manuel Vicente ran the state oil company Sonangol from 1999 until 2012, when Dos Santos named him as his Vice-President – not to pave the way for an orderly transfer of power, but to keep him close. General Manuel Hélder Vieira Dias Júnior, ‘Kopelipa’ remains minister of state and head of the Intelligence Bureau in the President’s Office (overseeing the military, the intelligence and the police), and General Leopoldino Fragoso de Nascimento is a former Presidential Chief of Communications and currently a special adviser to General ‘Kopelipa’.

Sources at the BNA have told Maka Angola that Isabel dos Santos gave instructions to the Governor of the bank, Valter Filipe, to automatically guarantee the payments to the DT Group until December. This would be the same Valter Filipe nominated for the position of BNA Governor by Leopoldino Fragoso de Nascimento (aka General Dino). Was that appointment aimed at ensuring blanket approval for business deals emanating from the Presidency?

The ‘Triumvirate’ are on the public payroll and yet they have somehow managed to follow the President’s daughter, Isabel dos Santos, onto the Forbes list of billionaires. With patriots such as these at the helm of DT Group, why should Angola have any reason to prioritize this creditor over others? Surely, the presence of the ‘Triumvirate’ is in itself a guarantee of non-interruption to essential supplies of petrol or diesel?