Masters in Corruption at the Independent University

Not many developing countries manage to create 20 universities, including public and private, in the space of a decade. In 2009 alone, the Angolan government created six new universities by presidential decree. The expansion of higher education has been extraordinary. Since the Catholic University of Angola, the country’s first private higher education institution, was founded in 2001, the government has recognised a further 15 private universities.

This article does not try to deal with the quality or the standards of higher education in the country, nor indeed with education in general. Instead, it untangles some of the political and commercial dealings, including conflicts of interest that have made possible the recent proliferation of universities within the current legal framework.

As its first case study, Maka Angola presents here the results of its investigation into the Universidade Independente de Angola (UnIA – Independent University of Angola), which was founded and began its operations in 2004.

On March 14, 2009, the Secretary of State for Higher Education, Adão do Nascimento, inaugurated the Independent University’s new building, accompanied by his superior, the then Minister of Education, António Burity da Silva. Also present was the then Deputy Minister of Education, Pinda Simão, who has held the ministerial portfolio since 2010. The building, constructed on a budget of US$12 million, is an investment by the private company DEA (Desenvolvimento do Ensino em Angola S.A.), which owns the university.

On this occasion, António Burity da Silva and his deputy, Pinda Simão, were introduced only as invited officials. Yet both were the main hosts of the organisation in their dual function as government education officials and as the co-owners of UnIA. Furthermore, Carlos Alberto Burity da Silva, brother of António and the chancellor and co-owner of UnIA, was also the national director of the Interior Ministry’s Bureau of Studies, Information and Analysis, while holding the rank of Commissioner of Police (equivalent to a three-star general).

DEA’s shareholdings are as follows: 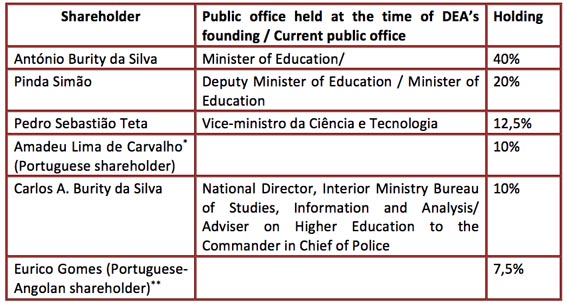 * In statements presented to a court in Lisbon, António Burity confirmed that he had made a loan to Amadeu Lima de Carvalho to pay the mortgage on a building, and the latter lost his 10% share in DEA when he failed to pay back the loan.

** Eurico Gomes is Deputy Minister Teta’s main partner in a series of dealings that have involved the diversion of public funds under the deputy minister’s supervision. For more information see previous post on Maka Angola.

The school, the Pigsty and the University

The Education Ministry, headed by António Burity da Silva and Pinda Simão, was formally involved in the building of UnIA, through the ministry’s Luanda Provincial Delegation which made the formal request to the Luanda Provincial Government for work to be done on a building intended as a public primary school. Instead of a primary school, UnIA appeared on the designated site.

Documents show that on March 30, 2004, the Provincial Delegate for Education in Luanda, André Soma, sent the Provincial Directorate of Planning and Urban Management a request (nº 0117/GAB/DP/2004) for permission for “improvement and restoration work on the Public Primary School”.

The very same day, the director, Joaquim Israel Marques, authorised the following work on the school:

• Texturing, plastering, painting inside and outside, replacement and waterproofing of the roof;

In authorising the work, the directorate made clear that “no work on the structure of the building is authorised, and the works will be overseen by competent agents”.

The primary school in question had been built two years earlier, but on the orders of the Provincial Education Directorate it remained closed and the building was left abandoned. However, the Provincial Delegate for Education, André Soma, kept control of the site and used it to set up a pigsty, and ran a small private business raising pigs. Other people also used the buildings to keep animals that were then slaughtered in the abattoir across the road.

According to sources who were interviewed, André Soma was acting as a figurehead for his boss in liaising with the contractors who built the university instead of restoring the primary school. Some months later, on September 20, 2004, Soma received from DEA the sum of US$6,340, deposited into his private account at the Banco de Fomento de Angola. People involved in the process confirm that Soma had illegally given away the public school site, for which he was responsible and which he had been using for his own private business, in the expectation of being made a shareholder in the university. However, once the project was under way, his superiors, António Burity da Silva and Pinda Simão, decided to simply leave him in the role of Provincial Delegate for Education, which he had already occupied for more than 20 years.

The Angolan partners, who have considerable fortunes hidden in tax havens, through offshore operations of Portuguese banks, transferred the funds needed for the construction of the university to Portugal, so guarantees and payments could be issued. For example, on August 30, 2005, António Burity da Silva issued a check for two million euros from his account with the BCP Bank & Trust (Cayman) Ltd, the offshore subsidiary of the Banco Comercial Português in the Cayman Islands. The check was issued to the Portuguese shareholder Amadeu Lima de Carvalho, to coverPortugal-based operations.

When DEA needed a loan of US$350,000 from the Banco de Fomento de Angola (BFA) to cover building costs, the then Deputy Minister (and now Minister) of Education, Pinda Simão, and the Deputy Minster of Science and Technology, Pedro Sebastião Teta, served as guarantors for the loan to DEA. BFA approved the loan on February 10, 2005, over a period of 36 months at a preferential annual rate of 10 percent.

At the time when the university was established, the Law on Crimes Committed by Public Office Bearers (Law 21/90) was in force in Angola, forbidding public office holders from participating in business dealings over which they had influence or decision making powers (article 10, 2). The Law on Administrative Probity (Law 3/10) includes the same legal provision (article 25, 1, a).

On April 5, 2005, José Eduardo dos Santos, as President of the Republic, promulgated Decree 11/05, which authorised DEA to set up UnIA. The university was already operating, and the presidential decree bestowed powers on the then Minister of Education, António Burity da Silva, to approve the courses offered by UnIA (article 2) and its statutes and guidelines (article 5, 1) as well as responsibility for the periodic assessment of the institution (article 5, 2).

On August 18, 2008, the Secretary of State for Higher Education, Adão de Nascimento, who was António Burity da Silva’s subordinate, signed Executive Decree 215/08, authorising UnIA to offer courses in law, electronic and telecommunications engineering, and management and marketing. This measure had retrospective force for courses that had been offered since 2005.

The Law of Corruption

The events described so far include several instances in which the law was broken. The principle of public probity forbids a public servant from accepting loans, benefits or offers that could affect “the independence of his judgement and the credibility and authority of the public administration and of its institutions and services”. By acting as guarantors for their private company’s loan from BFA, the public office bearers Pinda Simão, Pedro Sebastião Teta and Commissioner of Police Carlos Burity da Silva called into question the credibility and authority of the public administration by creating a serious conflict of interest. BFA is a private bank with public capital through the investment by Sonangol, the state-owned oil company, in UNITEL, the mobile phone service provider that holds 49 percent of the bank’s shares.

In addition, António Burity da Silva incurred the crime of illegal enrichment (article 25, 1, g) by revealing financial means incompatible with his remuneration as a public servant when he delivered a check for two million euros drawn from his private account in the Cayman Islands.

António Burity da Silva, Pinda Simão and André Soma also incur the crime of illegal enrichment (article 25, 1, j, k, of the Law of Public Probity) by appropriating public land for which the Ministry of Education was responsible. The same legislation also applies to Deputy Minister Pedro Sebastião Teta and the current adviser to the Commander-in-Chief of the National Police and the rector of UnIA, Commissioner Carlos Burity da Silva.

André Soma also broke the Law of Public Probity (article 18, 1, 2, a) by accepting an offer of US$6,500 to make available a site allocated to the Ministry of Education and of which he, as the provincial delegate for education, was in charge, and also by making administrative decisions in favour of DEA.

In addition to penal sanctions, the Law of Probity (art 30, 1, b) indicates that in cases of this nature, those responsible for acts of corruption be subject to the following measures, among others:

“The removal of goods or sums of money illegally appropriated, [the payment of] full compensation for damage, if any, dismissal from public office, the payment of a fine of up to three times the sum illegally acquired and prohibition from doing business with public entities or receiving, directly or indirectly, tax or credit incentives and benefits, including through the intermediary of a legal person of which he is the majority shareholder, for a period of ten years.”

Yet the DEA shareholders continue to enjoy the support of their peers and colleagues in government. The Minister of Social Communication, Carolina Cerqueira, was disguising corruption and acting in a spirit of institutional solidarity when she recently made an announcement concerning a radio station owned by the university: “When the ministry comes to license and authorise the functioning of community radio stations, Radio UnIA will be one of the first to receive this privilege, as its importance puts it on the priority list.”

The DEA shareholders, who still hold public office, should in normal circumstances and according to the law be discharged from their duties and face court proceedings.

Instead, the acts of corruption and conflicts of interest by Minister Burity da Silva and his collaborators, his brother Carlos Burity da Silva, Pinda Simão and Pedro Sebastião Teta, had the blessing of the President of the Republic. The Head of State and of Government bears ultimate responsibility for the most blatant acts of government corruption, because they pass through the Council of Ministers where José Eduardo dos Santos invariably approves them. The situation is so severe that any policy aimed at fighting corruption needs to tackle the impunity granted by the President, who institutionalises corruption.