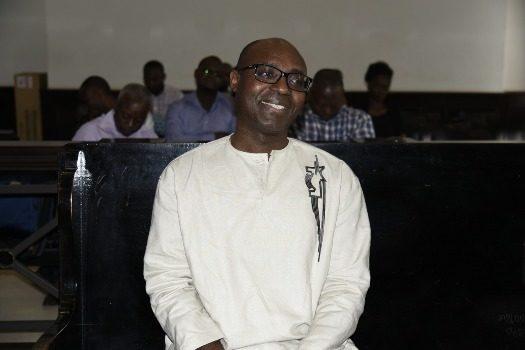 IPI’s World Press Freedom Hero award honours journalists who have made significant contributions to the promotion of press freedom, particularly in the face of great personal risk. Together with the annual Free Media Pioneer award, it will be presented during a special ceremony on June 22 in Abuja, Nigeria during IPI’s annual World Congress and General Assembly. For the past four years, both awards have been given in partnership with Copenhagen-based International Media Support.

Marques began his career as a reporter for the state-owned newspaper Jornal de Angola in 1992, before being fired over his willingness to deviate from the line set by Angolan President José Eduardo dos Santos, who ruled the former Portuguese colony with an iron fist between 1979 and 2017.

Marques first drew official ire in 1999 when he published an article in the independent weekly Agora describing dos Santos as a dictator responsible for destroying the country and promoting incompetence and corruption. Shortly thereafter, Marques was arrested and charged with defamation. He spent 43 days in pre-trial detention before being convicted and given a six-month prison term in March 2000. Angola’s Supreme Court later reduced the penalty to a suspended sentence.

Much of Marques’s crusading work has focused on the kleptocratic management of natural resources in Angola, whose vast oil and mineral reserves have enriched a small ruling elite even as millions remain in poverty. His internationally best-known work, the 2011 book “Blood Diamonds: Corruption and Torture in Angola”, detailed allegations of murder, assault, arbitrary detention, and forced displacement of civilians in relation to the country’s lucrative diamond-mining industry. After a group of top Angolan generals implicated in the book filed charges, Marques was again given a six-month suspended sentence for defamation.

In the early 2000s, Marques also reported prominently on corruption and alleged military abuses in the oil-rich province of Cabinda, home to a long-running separatist movement. Most recently, he published the report “Angola’s Killing Fields – A Report on Extrajudicial Executions in Luanda”. Marques has faced threats and physical and verbal harassment from the authorities throughout his caereer. 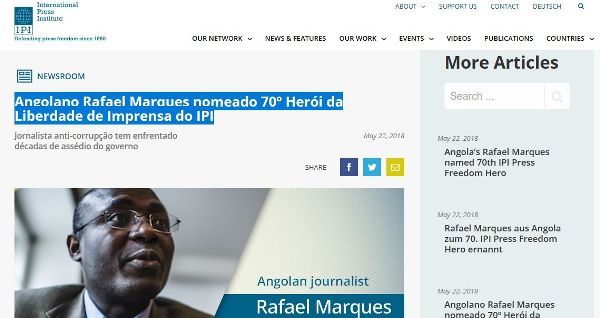 IPI Executive Director Barbara Trionfi hailed Marques for his dedication to the pursuit of truth in an unforgiving environment for press freedom.

“Despite Angola’s systematic repression of independent media, Rafael Marques has managed – at great personal risk – to bravely and persistently shine a light on abuse of power at the highest levels”, she said. “Through his articles, books, and research, Mr. Marques has carried out the type of watchdog journalism that the country’s state-dominated media have been unable to perform, providing an essential service to the Angolan public and the international community.”

Trionfi also condemned an ongoing court case against Marques, in which he and a colleague, Mariano Brás Lourenço, face charges of insulting a public authority over a 2016 article scrutinizing a real-estate transaction involving Angola’s then attorney-general. The pair face up to four years in prison if convicted. The case has raised doubts about possible democratic reform in Angola under President João Lourenço, who succeeded dos Santos last year.

“Angola must end its harassment of Mr. Marques and all other journalists in Angola”, she remarked. “If President Lourenço is serious about bringing change, he must allow for critical, independent media to flourish.”

In a statement, Marques welcomed the award as “wonderful news”.

“I am deeply honoured and thankful”, he said. “I am honoured because this award comes at a time when I am on trial for exposing high-level corruption, while President Lourenço claims to be fighting it. Yet it is unfitting to receive an international award for doing the basic work of exposing the ills of my own country in order to right them for the common good.”

Marques is the first IPI World Press Freedom Hero from Angola, and the third from the Portuguese-speaking world, after Portugal’s Nuno Rocha and Brazil’s Júlio de Mesquita Neto. A graduate of Goldsmiths, University of London and Oxford University, Marques previously received the Allard Prize for International Integrity and the Train Foundation’s Civil Courage Prize, among other awards.

The 2017 World Press Freedom Hero Award was given to Ethiopian journalist and blogger Eskinder Nega, who spent nearly six years in prison on sham anti-terror charges before being freed in February 2018.