Before agreeing to step aside after 38 years in power, Angola’s former President, José Eduardo dos Santos, made sure he obtained guarantees of permanent immunity from prosecution for any crimes committed during his time in office.

For Angola’s ruling party MPLA and lawmakers, it was a pragmatic necessity: how else could Dos Santos be persuaded to step aside? The man had an international reputation as one of Africa’s most zealous kleptocrats, using his position to enrich himself and his extended family.

Six months on, however, a complex international investigation into an attempted US $1.5 billion fraud involving his son José Filomeno dos Santos “Zenú” has put Angolans openly discussing whether the Dos Santos family en masse should have those immunity guarantees removed. His son is firmly in the sights of criminal investigators who have documentary evidence that it was his father who oversaw the attempted scam.

As the son of Angola’s long-serving President, José Filomeno dos Santos (familiarly known as ‘Zenú’) was put in charge of Angola’s Sovereign Wealth Fund, a multi-billion dollar reserve intended to set aside some of today’s oil revenues for the carbon-depleted future.

With every passing year, suspicion grew that his management of the Sovereign Fund was inept, if not criminal.

Then late in 2017 the British financial authorities detected a suspicious high-stakes money transfer attempt via London and tipped off the Angolans. The case has proven explosive, involving Angolan Central Bank (Banco Nacional de Angola – BNA) monies being siphoned off into private companies owned by Zenú and his associates, as reported extensively by Maka Angola.

Zenú was fired from his official positions and along with the Governor of the Angolan Central Bank (Valter Filipe, not only lost his job but has now been indicted for his part in the alleged fraud. And as investigations continue in at least two countries (Angola, and the UK), there are indications that responsibility for the attempted diversion of state funds may involve the former President himself.

Just two months before he was due to leave office, President José Eduardo dos Santos convened a meeting with his Finance Minister and the governor of BNA to study a proposal for a US $30 billion credit, allegedly being put together by an international cartel of financiers.

Somewhat implausibly, the proposal had been prepared by a shell company named Mais Financial Services (MFS) which just happened to be owned by his son, Zenú. The President allegedly ordered his officials to accompany Zenú to London that very night to discuss the proposal with the international partners. Accompanying them on the private jet to London was Zenú and his partner in MFS, his childhood friend and business associate, Jorge Gaudens Pontes Sebastião.

MFS had proposed raising US $30 billion in the international financial market to support economic diversification via a State Strategic Investment Fund (for which the Portuguese acronym is FIE). It would also allow for “the provision of foreign currency equivalent to US $300 million a week” to the BNA, as well as the refinancing of Angola’s foreign debt.

Such a large line of credit would, naturally, require government guarantees, usually in the form of a memorandum of understanding issued by the government in question.

Unusually, in this case, the guarantee required would be for the BNA to deposit, in advance, US $1.5 billion to the consortium via Mais Financial Services and its UK partner Resource Conversion.

Resource Conversion is a UK-registered company, formerly known as Kapital Mines plc. It was set up in 2011 as a company “specializing in waste management and remediation services” with assets valued at US $12.8 million. One of its directors, a Dutch national with the impressively long name of Hugo Anthonie Folke Godfried Reinier Onderwater, who is listed as resident in Portugal, was their representative at the London meeting. An agricultural engineer, Mr Onderwater, is also listed as a company director of Nisko Construction and Project Services, which conveniently for him shares the same address as Resource Conversion (Suite A 6 Honduras Street, London, EC1Y 0TH), which was also the seat of Kapital Mines plc prior to its 2011 name-change.

According to Zenú’s friend and business associate, Jorge Gaudens Pontes Sebastião, who wrote a formal letter to BNA on June 27, 2017, the “banking syndicate… refused to proceed on the basis of a memorandum of understanding alone”. The syndicate (allegedly comprising Bankinter from Spain, BNP Paribas from France, Deutsche Bank from Germany, HSBC from the UK the ICBC from China and Sumitomo from Japan) required a “service agreement” to be set up between the Angolan Central Bank and MFS.

To anyone with the slightest understanding of global finance, this was laughable. As one international financier explained to Maka Angola:
“Generally, when contracting consortia to acquire financing for their countries through Finance Ministries, each nation state will always mandate an international bank of outstanding reputation to set up and lead the banking syndicate.”

For example, the Angolan state oil giant Sonangol has regularly and directly used Standard Chartered Bank to organize bank syndicates to raise capital for its operations.

From start to finish the MFS proposal included a number of preposterous statements, e.g. that the company would only “propose a financial viability study to BNA when the dialogue with the banking syndicate is initiated” and “as the study had not yet been formally contracted, this was why the proposal still bore the seal of Mais Financial Services”.

Similarly, that “the funds raised would have to be managed by a company ‘with highly specialized management’ and to that end they would hire another company named Mais Financial Engeneering” (sic) (spelled exactly like this, poorly written in English, since the correct form would be Engineering), also conveniently created by Zenú.

Meanwhile, to add insult to injury, Zenú’s company was billing BNA approximately US $16 million for MFS’s alleged “technical and financial consultancy” in ensuring US $1.5 billion would come their way.

A Chip off the old Block

No-one who knows Zenú in person credits him with being the brains behind this ludicrous scheme, even though he stands accused of many other allegations of corruption and diversion of funds during his reign as the chairman of the board of the Sovereign Wealth Fund.

From the information available, the signs point higher.

Just weeks away from the end of his 38 year reign, President dos Santos orders the National Bank of Angola to “insistir nos esforços” (persist in its efforts) to ensure the success of his son’s proposal. He responds to an official communication from the BNA Governor reporting back on the London meeting with an authorization of the ‘Asset Allocation and Management Agreement’ on August 10, 2017 – barely two weeks before the election of his successor.

On the same day that the BNA governor, Valter Filipe, goes ahead and signs the agreement with MFS and Resource Conversion, these two ‘dummy’ companies fronting the so-called consortium form a new entity named “MFS and Resource Partnership Project Ltd.”

The BNA then proceeds to transfer a first tranche of US $500 million (of the 1.5 billion requested) to the bank account in London specified by MFS. Maka Angola was initially told that the US $500 million being sent over by the BNA as the first tranche involved an account with Credit Suisse. Sources in London now say that MFS had produced a bank guarantee allegedly issued by Credit Suisse as evidence of their liquidity. The sources state categorically that this was a fake.

Subsequent information suggests that the BNA made the US $500 million transfer to the account of a mysterious third party, Perfectbit, whose stated assets held by HSBC in London were equivalent to a mere US $790. Sources say the director of Perfectbit, a Brazilian national named Samuel Barbosa da Cunha, the account trustee, has since been arrested by the British authorities. 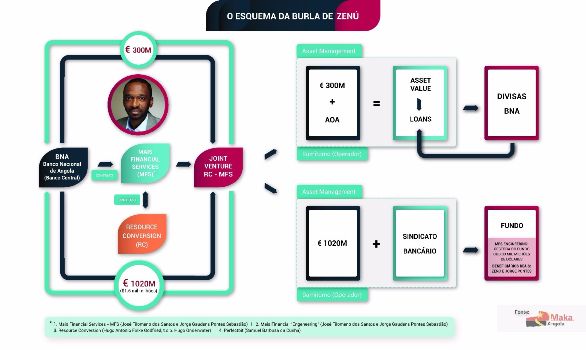 Maka Angola has been told: “There is no instance of a country’s central bank ever hiring asset managers, much less domestic ones, to act as intermediaries in proving liquidity or asset availability”. But then again “ it is even more ridiculous to suggest that management companies would serve as intermediaries to set up banking syndicates to issue sovereign debt and/or financing to a state.”

A legal expert consulted by Maka Angola examines the details of what is known so far and gives an ‘off the record’ opinion: “the acts described and attributed to José Filomeno dos Santos (Zenú) and Jorge Gaudens Pontes Sebastião are consistent with criminal association, falsification, fraud, influence-peddling and money-laundering – all crimes that are punishable under the Angolan penal code.”

Apparently the Angolan authorities investigating this ridiculous attempt to loot the Angolan treasury agree. Zenú is now facing charges and has had to surrender his passport.

Given the existence of first-hand documentary evidence that the MFS scheme was approved by the then President, José Eduardo dos Santos, the latter’s immunity against criminal prosecution may not save him. Immunity could be set aside, though this would be for the country’s parliament to determine.

However, specialists who follow Angolan politics say Dos Santos may have hoped that by retaining his role as president of the ruling MPLA party, he could be a ‘Putin’ to President João Lourenço’s ‘Medvedev’ – the real power behind the titular office-holder. Instead, his successor is proving to be no puppet and Lourenço’s carefully-calculated moves against the most egregiously corrupt members of the previous regime are winning him popular support. It’s possible that Dos Santos could avoid being brought to justice if he were to submit all authority to President Lourenço, step down from the MPLA and abandon political life altogether. It’s equally possible that he may yet find there are no guarantees to save him from the consequences of decades of looting his country’s coffers for his family’s personal gain.

*D. Quaresma dos Santos contributed to the English version of this story.