When Angola’s President decreed in 2012 that the north-western enclave of Cabinda should have a deep-water port, it was heralded as a private sector deal that wouldn’t cost the Angolan state a single cent.

The estimated US $540 million construction costs would be funded by private investors and banks. For once, there was no Angolan public sector involvement contemplated.

That proved to be a chimera.

In fact, the entire Caio Port (Porto de Caio) concept seems to have been a vanity project involving the President’s son, José Filomeno dos Santos known as Zenú and his very close friend and financial mentor, Jean-Claude Bastos de Morais. And sadly, the project is bleeding millions upon millions of dollars from the Angolan Sovereign Wealth Fund controlled by Zenú.

The proposal for Cabinda’s deep water port at Caio was first announced in a 2012 presidential decree as a wholly private-sector initiative. Yet the contract was awarded, without feasibility study or competition, to a brand-new company created just a few months earlier.

That company was Caioporto, S.A.

Its name alone suggests that this brand-new venture was likely set up specifically for the Caio Port project.

Curiously, Caioporto not only had no prior experience in the construction of port facilities or deep-water harbours but when it began its registration process in October 2011 it listed a risibly small operating capital of barely US $20,000.

Significantly however, the company’s owner (with 99.9% of the shares) was listed as Mr Bastos de Morais, a man well-known in Angolan circles as a special friend of the President’s son and his main business associate. Registration of his new enterprise was duly published in the official Diário da República (daily gazette) in January 2012.

Seven months later, to coincide with the President’s birthday, Presidential Decree No. 177/12 was published, authorizing the Transport Minister, Augusto Tomás, to draw up a concession contract with Caioporto, S.A.

And, as part of his birthday celebrations, one week later on August 20th, President dos Santos ceremonially laid the symbolic first stone of the future Caio Port.

It was a very sweet deal for Caioporto. Caioporto would arrange the conception of the project, the funding, planning, remodelling, engineering, construction and provisioning. In exchange, it would have the exclusive contract for furnishing installations and provisioning services to the Port and any vessel using it. Provided it could finance the project, Caioporto would get the construction and operational monopoly. The reward for taking on the initial financial risk was immense: to enjoy all the profits from the sea port once it was operating.

Sources close to Caioporto have admitted privately that this was nothing more than a scheme aimed at conferring an “air of legality” to a project designed to provide a source of income for the President’s son.

Angolan state funds to the rescue

By December, the President saw fit to issue another Presidential Decree (234/12). It inserted into the contract between Angola and Caiporto, S.A. a clause offering a state guarantee to any investors.

Suddenly, the “risk” supposed to be borne by Caiporto (in exchange for which it was getting monopoly benefits), was actually being borne by the Angolan State.

“Legally the State now becomes the Guarantor for any loans awarded by banks to private companies. This was a fundamental alteration of the entire premise of the deal,” says Rui Verde, Maka Angola’s legal adviser.

“Before (this decree 234/12) the private investor was the sole ‘owner’ of any loss or profit. Now it could only profit. If there were any losses, it would the Angolan State who would have to bear them.” “In other words, they ‘nationalized’ the losses and ‘privatized’ the profits.”

As if that weren’t enough, the decree also added a clause assuring the private company of a “minimum return” to ensure the economic viability of the new seaport.

The devil is in the detail, as Rui Verde explains: “Let’s take, as an example, that the private company Caioporto SA needs a minimum return of a billion kwanzas per month from the port’s operations to pay its costs and obtain a profit. If the Port earns that month, the company gets it all. If the port only earns, say, 700 million, the 300 million shortfall will be handed over to the company by the State of Angola. Caioporto will get a billion kwanzas a month, no matter what.”

Meanwhile, we should remind ourselves, that Caiporto was still unable to persuade any other private investors or financial institutions that it had the wherewithal or expertise to deliver this project. It lacked the critical mass for the project to get off the ground without a state guarantee.

Another period of inactivity, silence and stagnation elapsed. At the end of July 2014, more than 18 months after that state guarantee was published, there was suddenly an announcement that works on the Caio Port would begin the following December. The works would not build on that symbolic first stone laid by the President back in August 2012. That had just been for show and the stone had long since been reclaimed by the sea. 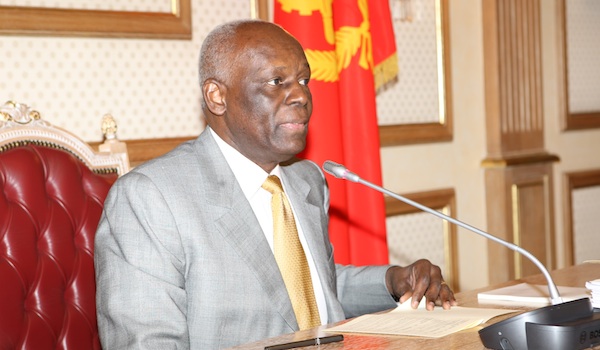 Presidente Dos Santos during a meeting of the Council of Ministers.

Another year went by. And on December 29th, 2015, a third presidential decree (230-A/15) was issued, creating yet more benefits for the port zone to be exploited by Caioporto and authorized a State Guarantee to the value of US $751 million. The following month Caioporto announced the first phase of construction and the conclusion of the geological report and feasibility study.

This was somewhat unusual. The project, that back in 2012 was considered so urgent that it had to be awarded to Caioporto without being put out to tender, in fact had only obtained reports that are vital prior to any construction, in 2016. It begs the question: how did the President know back then that the project was a) necessary and b) feasible?

Another year went by. Then in December 2015, President José Eduardo dos Santos issued his fifth presidential decree on the project (238/16). Now suddenly the Angolan State itself would be the financier of the construction of the Port of Caio, thanks to a line of credit granted by China as defined in presidential decree 138/16 of the previous June.

Four years after announcing a wholly private initiative to finance the construction of Cabinda’s deep water port, the President had executed a u-turn. Tragicomically, in spite of Caiporto’s abject failure to obtain private funding, its monopoly contract to enjoy all the profits while bearing none of the risk, remained intact. The State would take on 85% of the cost, while Mr Bastos de Morais’s company would provide only 15%, with the contract’s value now estimated at US $831 million.

This was a 54% increase in the estimated budget for the port’s construction (US $290 million over and above the initial projected cost).

Meanwhile the loan obtained from China would be for one if its own company to build the port: the China Road and Bridge Corporation (CRBC) which supplies commissions to its Angolan go-between, who is none other than José Filomeno dos Santos.

How does President dos Santos get away with this? With absolute authority to rob the sovereign fund in total impunity? The 15% required to complement the Chinese loan would amount to US $124 million . And yet the Sovereign Fund announced that its “investment” in the project would be US $180 million. A difference of US $56 million.

Is there anyone in the upper echelons of power in Angola who dares to question the President, his son Zenú, or his son’s buddy Jean-Claude Bastos de Morais about the final destination of those US $56 million?

Apparently not. No more than they dare question the entire validity of this project.

Sources close to the President suggest Caioporto was a shell company, set up to suck money from the State via these successive presidential decrees in order to illegally enrich the President’s son.

If – and it’s a big IF – the seaport is ever concluded and becomes operational, it’s also the President’s son (and his buddy) who get to operate what would be Angola’s only deep-sea port. As a monopoly, with a state-guaranteed income.

The same sources say that no-one believes the President is being this generous to his son’s friend by channeling so much money his way. Jean-Claude Bastos de Morais is assumed to be the means whereby the President can assure a rich future for his son, Zenú. They point to the revelations about the Angolan Sovereign Fund and the Swiss-based Quantum Global as evidence that the company set up in the name of Jean-Claude Bastos de Morais is a go-between for the Sovereign Fund investments. 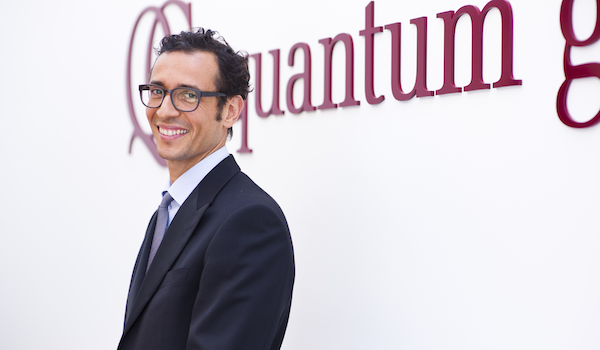 Ever since the Angolan Sovereign Fund was created in 2012, many Angolans have questioned the management and destination of the US $5 billion at its disposal.

The latest FSDEA audited report, of 2014, revealed that it invested close to a billion dollars, with 12.1% of the value of that investment wasted in consultancy fees to the companies led by his mentor and friend Jean-Claude Bastos de Morais.

The bloodletting from Angola’s Sovereign Fund was such that in 2014 José Filomeno dos Santos paid Quantum Global an additional US $11.6 million as “Fund’s experts economists to understand the fundamental processes that affect the national economy ”. If you say so.

The Sovereign Fund transferred so many millions of dollars to Quantum Global, that it had to explain in additional footnotes to its report that some these related to passive real estate values, while other examples were that José Filomeno dos Santos paid US $4.7 million in “management fees for the fourth quarter of 2014” while “miscellaneous project expenses” accounted for another US $2.1 million.

There is absolutely no brake on the Sovereign Fund’s outgoings. It granted US $16.8 million to the Benguela Development S.A company, which set up on October 26 2007 by José Filomeno dos Santos, Jean-Claude Bastos de Morais and Mirco Martins, the notorious son-in-law of the Vice-President Manuel Vicente. The justification was that it was to set up a hotel hospitality industry academy in Benguela. The Sovereign Fund then gave another US $12.3 million to African Innovation Foundation, also headed by Jean-Claude Bastos de Morais, and which counted José Filomeno dos Santos on its board of directors.

The President might as well have issued a presidential decree to the effect that the Sovereign Fund is his own son’s personal bank account.

That would explain how on January 30 this year, the Sovereign Fund announced an investment of US $180 million in the firm known as Caioporto, SA in exchange for 50% of its stock, as reported by Bloomberg. Even Caioporto is somewhat tied to Quantum Global, as the Organised Crime and Corruption Reporting Project (OCCRP) has found. Caioporto’s website is registered to Turtle Management (Switzerland) which is traced back to Quantum’s own IT registrants.

Jean-Claude Bastos de Morais has chosen to ignore all of Maka Angola’s requests for comment on this story. A spokesperson for the Angolan Sovereign Wealth Fund said they would get back to us. But even when pressed on the date of publication, there was no response. Perhaps they have no answers to what amounts to daylight robbery. And it’s high time that the ruling MPLA President’s successor took a stand.